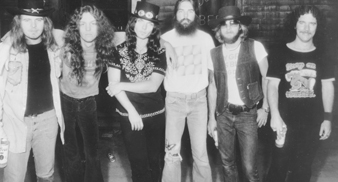 Lynyrd Skynyrd keyboard player Billy Powell died yesterday (January 28) of a suspected heart attack at the age of 56, at his home in Florida.

One of the original members of the Southern rock band famous for hits such as “Sweet Home Alabama”, “Free Bird”, and “What’s Your Name”, Powell has had a history of heart problems, and Associated Press report that he called 911 in the early hours of the morning citing breathing problems.

A message on the Lynyrd Skynyrd website lynyrdskynyrd.com says his death is a “Great loss” and that “The family and band request your respect and understanding during this difficult time.”

Lynyrd Skynyrd last released an album ‘Vicious Cycle’ in 2003 and were inducted into the Rock And Roll Hall of Fame in 2006.

The band are currently on tour in the US, but several upcoming shows have now been cancelled.