Actor Jared Leto's on a quick mission to Mars 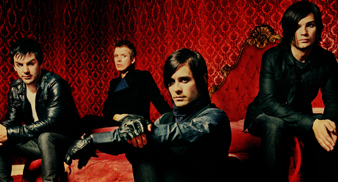 Hollywood star, Jared Leto, whose credits include Fight Club and Requiem For A Dream, is the frontman of MTV award winning rock band 30 Seconds To Mars.

The band’s first UK single ‘Attack’ is due for release next month and is taken from their debut album ‘A Beautiful Lie’ which will follow on February 26.

30 Seconds To Mars will play only two shows in the UK just before the releases. The album has already sold in excess of a million copies stateside and due to spreading popularity the venues for the gigs have been upgraded to:

Manchester Academy 2 (was Roadhouse) on January 31
London, Electric Ballroom (was Underworld) on February 1

Original tickets will remain valid at the new shows.

Aside from promoting his new musical project, Leto is currently filming the role of Mark David Chapman, in new film ‘Chapter 27’ about the John Lennon assasination.

The actor has reportedly gained 62 lbs in weight for the role of the killer by eating cocktails of Haagen Dazs ice cream with added soy sauce and olive oil!