Singer lines up 10 dates for next spring 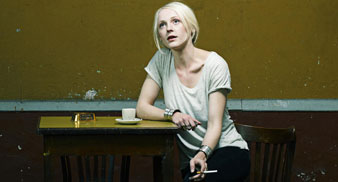 Laura Marling has announced details of her biggest UK tour to date.

The singer, who released her third album ‘A Creature I Don’t Know’ in September, will play 10 dates across the UK in March 2012.

The tour begins at Cambridge Corn Exchange on March 1 and runs until March 13, when Marling headlines Nottingham’s Royal Concert Hall.

The run of shows also includes a gig at London’s HMV Hammersmith Apollo, which will be the singer’s largest ever UK headline show.

This is Marling’s second major UK tour in support of ‘A Creature I Don’t Know’. She played an extensive tour of UK cathedrals earlier this year.

Tickets go onsale on Friday (December 9) at 9am (GMT). To check the availability of [url=http://www.seetickets.com/see/event.asp?artist=LAUARA-MARLING&filler1=see&filler3=id1nmestory] Laura Marling tickets[/url] and get all the latest listings, go to [url=http://www.nme.com/gigs]NME.COM/TICKETS[/url] now, or call 0871 230 1094.