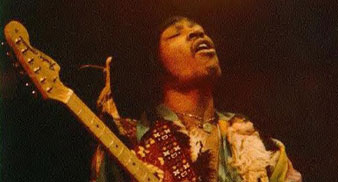 The guitar, burnt at Hendrix’s gig at London’s Finsbury Astoria on March 31, 1967, was found only last year by his original press officer Tony Garland’s nephew. It had been kept in the house of Jimi Hendrix Experience bass player Noel Redding, before being moved to the garage of Garland’s parents.

The Fender Strat, still fully intact, has visible flame scorches on the neck and pickboard had been expected to reach a price of $1 million.

Other lots in the huge sale of rock’n’roll artefacts included the last surviving Ludwig drumkit which belonged to late Led Zeppelin drummer John Bonham. The five-piece kit was sold for $46,000.

Jim Morrison‘s final 20 page notebook of poetry from Paris from 1971 containings lyrics and musings which was given to a friend just before his death sold for $115, 000.

Fame Bureau Director of Acquisitions Ted Owen commented on the auction saying: “Never before has such an important collection of music history been made available in a single sale. If there is one thing this sale shows, it’s how enduring the legend of Hendrix is.”

You can read all about the famous Hendrix guitar, with the inside story by the musician’s PR Tony Garland, whose idea it was to set the guitar on fire by clicking here.