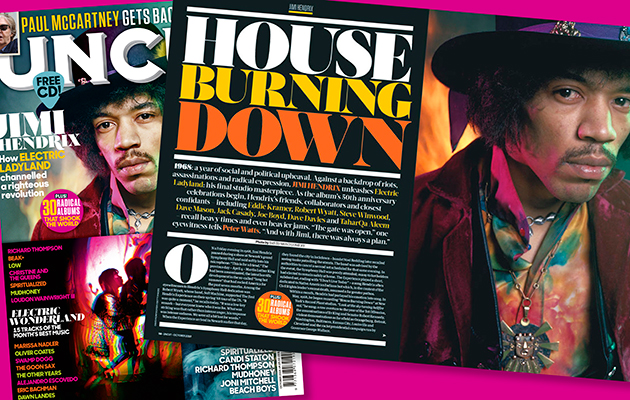 On a Friday evening in 1968, Jimi Hendrix paused during a show at Newark’s Grand Symphony Hall and said softly into his microphone: “This is for a friend.” The previous day – April 4 – Martin Luther King had been assassinated. “It was quite a moment,” recalls Robert Wyatt of support band Soft Machine. “It was a low-key remark – but everyone knew who it was for. What was striking was that rather than intense anger, his response was intense sadness. We were all a bit lost for words.”

Within a month, Hendrix began recording “House Burning Down” at New York’s Record Plant studios. “Look at the sky turning hellfire red,” he sang; a raw overture to the year of the Tet Offensive, the assassinations of Dr King and Senator Robert Kennedy and violent demonstrations across the USA.

The new issue of Uncut – in shops tomorrow (August 16) and available online now here – features a comprehensive exploration of the making of Jimi Hendrix’s third and final studio masterpiece, Electric Ladyland – created against the backdrop of a year of social and political upheaval.

In 1968, Hendrix was himself at a turning point. He had returned to America a conquering hero after his domineering performance at Monterey Pop Festival. Emboldened and inspired, he spent the summer at the Record Plant working on a new album – Electric Ladyland – that deftly incorporated funk, soul, jazz and electronica alongside heavy, unclassifiable jams.

“By the time he returned [to the USA] things had changed, big-time,” says Hendrix’s long-time engineer Eddie Kramer. “I don’t think he got more cocky or arrogant, but he definitely became more confident. He was a genuine international superstar, king of the city. And he liked that.”

You can read much more about Jimi Hendrix and Electric Ladyland – as well as 30 other radical albums that shook the world – in the new issue of Uncut, in shops tomorrow (August 16) and available online now.