Jerry Donahue’s guitar auctioned to raise funds for his treatment

It's signed by McCartney, Clapton, Page, Iommi, Gilmour and many more

American guitarist Jerry Donahue – renowned for being a member of Fotheringay and Fairport Convention, as well playing with Robert Plant, Elton John, The Beach Boys and many others – suffered a severe stroke in 2016 which left him unable to play guitar.

Today it was announced that an impressive array of rock A-listers have rallied to Donahue’s aid by signing one of his signature Telecasters that will be auctioned to raise funds for his treatment.

The guitar has been signed by Eric Clapton, Paul McCartney, David Gilmour, Jeff Lynne, the three surviving members of Led Zeppelin, Brian Wilson, Tony Iommi, Mark Knopfler and Pete Townshend, among others. The guitar is expected to sell for in the region of £10,000–£20,000 when it is auctioned by Gardiner Houlgate of Corsham, Wiltshire on December 11. 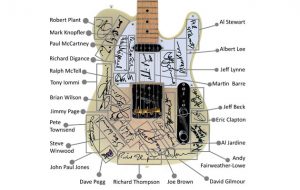 Dave Pegg, bass player with Fairport Convention and one of the leaders of the fundraising drive, said: “What’s brought these stars together to help is the respect they have for Jerry. They recognise he’s one of the greatest guitarists in the world with a unique style. The way in which Jerry could bend strings is totally different to English guitarists. No one else could do the multiple string bends, which is why guitar legends like Eric Clapton and Jimmy Page admire him so much.

“Mentally, Jerry is all there; the problem is his muscles. He needs a lot of therapy but it’s very expensive and his medical insurance only covers so much. Our dream is to help him play guitar again.”

Luke Hobbs, auctioneer at Gardiner Houlgate in Wiltshire said: “We’ve seen autographed guitars before but nothing like this. It’s like a Who’s Who of the greatest musicians the UK has ever produced. We’ve never come across any other guitar signed by all three members of Led Zeppelin and all three of the guitarists who played with 1960s hit band The Yardbirds – Eric Clapton, Jeff Beck and Jimmy Page. Paul McCartney also usually abstains from autographing equipment.”