The pair get back together for LA club's 50th anniversary 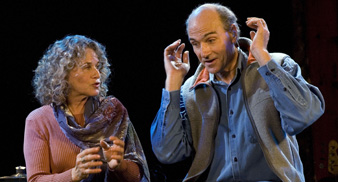 The venue was renowned as the cradle of the canyons scene in the late ’60s and early ’70s. and taylor in particular launched his career from its intimate stage on Santa Monica Boulevard.

The pair took turns at singing lead through the shows, backed by the same musicians who had accompanied them at the club in 1969. We imagine quite a few of the same audience wandered down from Topanga Canyon for the gigs – their old running mate Jackson Browne turned up.
Other famous faces in the crowds included Colin Farrell, John Cusack, William Shatner, Rick Rubin, Jane and Peter Fonda, Rob Reiner and Danny DeVito.

During the 90-minute set on Friday night, a woman fainted. Taylor stopped the show and called for assistance. When it was ascertained that she was OK, Taylor joked, “You gotta be careful how you mix those drugs if you know what I mean.”

The pair finished with a verse-swapping take on the 1971 hit, ‘You’ve Got A Friend’, written by King and made famous by Taylor.