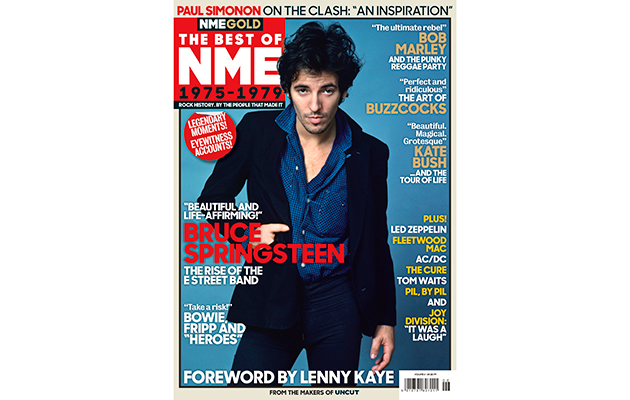 Happy New Year, first. From everyone here at Uncut, we hope you all had a peaceful festive break. Ours was, I guess, tempered with some sadness as we learned of the sudden death of former Uncut contributor, David Cavanagh. I’ve written a more formal obituary in our next issue, but here’s some links to a couple of David’s pieces that we’ve previously published on the Uncut site – including his tremendous review of David Bowie‘s comeback album, The Next Day. As one writer said to me on an email over the Christmas period, Cav “was a big influence on so many of us.”

David Bowie – The Next Day

Meanwhile, at the risk of moving onwards with unseemly haste, NME Gold: The Best Of NME 1975 – 1979 is out now. It’s in shops or you can buy it from our online store here. Here’s our one-shots editor John Robinson to tell you more about it.

Wondering how it had affected his business, I once chatted to Chris Squire, the late bass player in the progressive rock group Yes, about punk. It must have been, I naively suggested to him, a slightly alarming prospect to have gone to bed one night as a musician in a popular and ecologically-minded rock group, then wake up the next morning with barbarians at the gates, baying for his blood. Actually, Chris said, punk was all right. “When you’re playing a sold-out basketball arena in Toronto, to be honest, you didn’t really notice.”

Something of that co-existence is what you’ll find in this fifth archive magazine in the NME Gold series, compiling some of the best reporting, interviewing and reviewing from 1975-9. Punk, of course, has proved to be the dominant cultural movement in the period, leaving a legacy of empowerment, opportunity and initiative. This didn’t mean, however, that it would overnight wipe out the giants from the start of the decade. As much as it was about The Clash – you’ll hear new thoughts from Paul Simonon inside – and the Sex Pistols, it was also a time of big rock bands in their continuing pomp.

As Patti Smith’s long time collaborator Lenny Kaye writes in our bespoke introduction to this magazine, this wasn’t remotely a problem for the younger generation. Seeing an arena rock show by Zep or Floyd was part of an ongoing celebration of music which was then mirrored in smaller local scenes. What was happening at CBGBs on the Bowery in New York, meanwhile, wasn’t so different to what had happening in our cover star Bruce Springsteen’s New Jersey. As punk becomes post-punk, you can hear the next decade preparing to burst into life.

Inside you’ll read archive features and insightful new reflections on the period from those who were there. You’ll visit the pub with Joe Strummer to put things straight. Be in the good seats for Led Zeppelin at Earls Court. On Canvey Island with Dr Feelgood, even in court with Keith Richards. Alongside them you’ll extensive eyewitness accounts of important steps by huge talents like Bob Marley, Television, Tom Waits and Kate Bush. You’ll also read the surviving members talk about what it was like in Joy Division. “A laugh”, as it turns out.

Rather than a period exclusively consisting of violent change, 1975-9 was one from which high quality music in every form has endured. Lenny Kaye writes about having once seen Bruce Springsteen perform as the frontman of Child, one of his early Asbury Park bands. “I thought that guy is great,” Lenny recalls. “I hope he gets a shot in the music business.”

Don’t worry. It will all work out all right for him.