David Bowie, John Lennon, Aretha Franklin, Tom Petty and more are all in the latest issue on sale from September 20 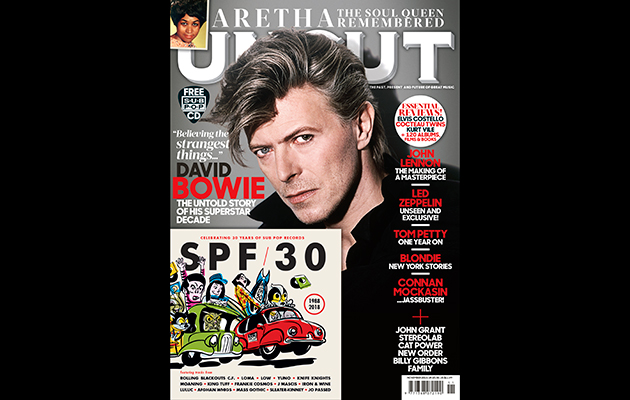 To Reeves Gabrels, the superstar years of his friend and collaborator David Bowie were a period of unlikely but essentially enlightening transformation. “He wasn’t a pop star,” he tells Rob Hughes in this month’s cover story. “He just happened to be able to make some pop records every now and then. That’s how he kept the machine running. But he was an artist. The function of entertainment is to make you feel good, the function of art is to make you feel.”

Gabrels is one of Bowie’s many confidants and co-conspirators that Rob’s spoken to as part of his fascinating deep trawl of Bowie’s most contentious decade. There is further wisdom and insight from Carlos Alomar, Peter Frampton, Nile Rodgers and many more who argue that this period was fundamentally necessary in shaping the work that followed: as vital a part of Bowie’s legacy, in its way, as his storied ‘70s. You’ll find the full story in our new issue, which is in shops from Thursday – but you can also order a copy here and have it sent direct to you at home.

And our Bowie celebrations continue! To compliment Rob’s story, the issue comes bagged with a pair of free Bowie art prints – including one exclusive, previously-unseen image.

Forgive me, please, if this Editor’s Letter feels a little like Christmas has come early, but I have some other exciting news to share with you. This month’s free CD has been specially curated for us by Sub Pop co-founder Jonathan Poneman. As his label celebrates their 30th anniversary he’s assembled a sampler featuring 15 of the label’s excellent current artists – including Rolling Blackouts Coastal Fever, Luluc, Low, Sleater-Kinney, J Mascis, the Afghan Whigs and Iron & Wine.

Elsewhere, Stephen Deusner pays tribute to the legendary Aretha Franklin, take you behind the scenes of John Lennon’s landmark Imagine album and reveal Led Zeppelin at work and at play while, on the first anniversary of his death, Tom Petty’s most trusted lieutenants recall good times with their beloved bandleader. There are more new interviews with Connan Mockasin, John Grant, David Crosby, Cat Power, Stereolab, Blondie, ZZ Top’s Billy Gibbons and Family.

As you’ll have gathered by now, it’s been a busy month for us. We hope you enjoy reading it as much as we enjoyed putting it together.