Introducing The History Of Rock 1976

Our encyclopaedic monthly project reaches the dawn of punk 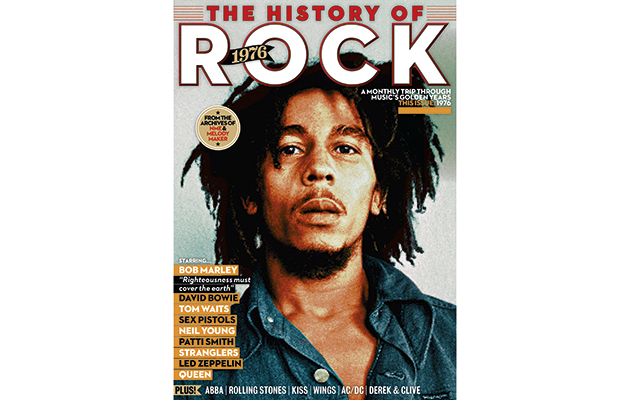 Lots going on this week, as we put the next issue of Uncut to bed any day now: I spent yesterday finally getting around to writing about Van Morrison’s amazing “It’s Too Late To Stop Now Volumes II, III & IV” for that mag. Plenty more to talk about in there, which I’ll start teasing in the next few days.

“It’s Too Late To Stop Now”, come to think of it, might have been a decent alternative title for our History Of Rock series. That encyclopaedic project reaches 1976 this week, with the arrival of our volume dedicated to that year turning up in UK shops on Thursday. The History Of Rock: 1976 is already available, though, in our online shop; just follow this link. And while you’re there, a reminder that among the wealth of back issues we’ve managed to restock the first volume, History Of Rock: 1965. Get it while we still have them etc etc…

“’Punk’ – as a name for rowdy, grassroots rock – has been floating around for the past 18 months. It is only towards the end of 1976, though, that a bright NME staffer called Tony Parsons grasps the nettle of a scene which has as yet no major record releases, and attempt to explain what it all might mean.

“He nails the history, and the context of this growing phenomenon, and also the heart of the matter, a distance between music listener and band. The issue for the kids is ownership. “They are hungry for music that they can identify with,” Parsons says. ‘Their music, not product.’

“Established giants – Bowie; Zep – still walk the earth, but with his radical stance, his passionate convictions and startling music, our cover star Bob Marley is the artist of the year. He and the reggae music being explored seriously in his wake – resonates strongly with disaffected punks, and a wider public, too.

“This is the world of The History Of Rock, a monthly magazine which follows each turn of the rock revolution. Whether in sleazy dive or huge arena, passionate and increasingly stylish contemporary reporters were there to chronicle events. This publication reaps the benefits of their understanding for the reader decades later, one year at a time.

“In the pages of this 12th issue, dedicated to 1976, you will find verbatim articles from frontline staffers, compiled into long and illuminating reads. Missed an issue? You can find out how to rectify that at our online shop.

“Rock in 1976 has become a two-speed economy, with its celebrity action and street-level reaction. Reporters from the music press are where it matters, chasing the story wherever it appears. Fighting Parisian stallholders with Patti Smith. Receiving cryptic messages from the Rolling Stones. Exchanging profanity with Derek and Clive. ‘This bloke comes up to me and he says…’

“It’s not a year for the easily-offended.”