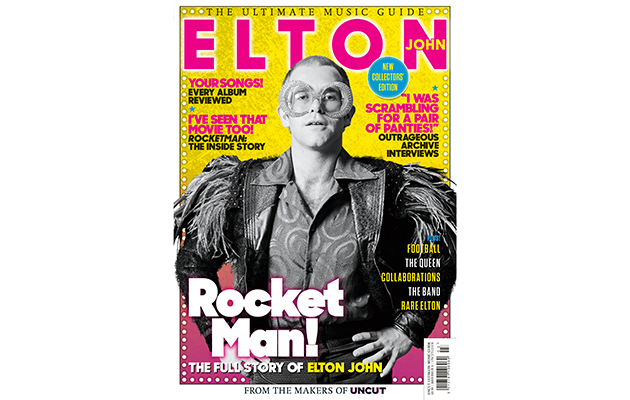 When Elton John’s Farewell Yellow Brick Road tour began last September, it marked the closure of one chapter in a long and remarkable career stretching back over 50 years. The tour reaches the UK in June and to mark this momentous occasion, we’re delighted to unveil Elton John: The Ultimate Music Guide. Inside, you’ll find outrageous archive interviews from Melody Maker and NME, new reviews of every studio album and even a behind-the-scenes peek at his biopic, Rocketman.

Elton John: The Ultimate Music Guide is on sale from Thursday (March 14) but you can order it now from our online store by clicking here.

To whet your appetite, here’s an excerpt from the introduction by Elton’s musical director and stalwart guitarist Davey Johnstone…

“I first heard about Bernie and Elton’s work through Gus Dudgeon, who’d become a good friend of mine when I came down from Edinburgh to London. I was part of the folk scene, jamming with Billy Connolly, doing the rounds up and down the country in an afghan coat and somehow avoiding abuse from skinheads. Gus said, ‘This guy Reg, he’s starting to get some action in America and his lyricist is doing a poetry album, would you like to play on it?’ It was a riot, we were listening to Cheech And Chong, it was where I first met Nigel, he was there rolling joints. Bernie was a sweet guy from Lincolnshire and seemed a bit bemused by all the attention they were getting. I was very moved by Bernie’s lyrics and that led to somebody suggesting that I play on Madman Across The Water.

“When I met Elton in the studio he was a quiet, shy guy, very nervous, wouldn’t say boo to a goose. The first time I played together with Dee and Nigel in the studio, it was instantly magical. When Elton asked me to join the band everyone around him was saying ‘You’re fucking mad, this guy’s a folkie.’ Elton said, ‘I can see something that’s gonna work for me’. I loved his songs, his playing, his singing, for me it was a no-brainer.

“The big breakthrough blew us all away. We could feel this vibe from the audiences, especially in the US. But it was album-tour-album-tour so we didn’t have time to realise what was going on. It almost became a little bit blasé. We were selling all these records it was ridiculous, you could turn on the radio in your limo and you’d hear Jimi Hendrix, then Joni Mitchell, then Led Zeppelin, then us, then The Beatles.”