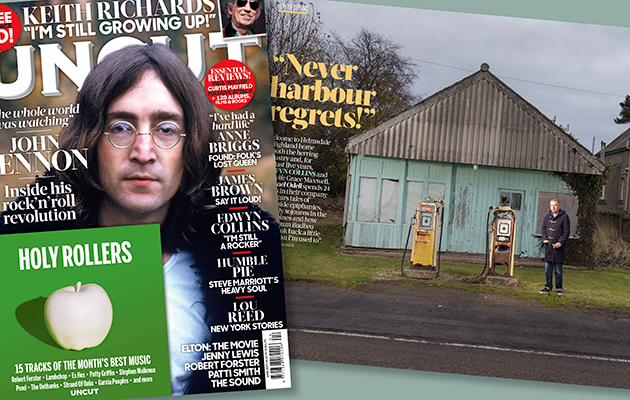 In the current issue of Uncut – in shops now and available to buy online by clicking here – we take a trip to Helmsdale in the far north-east of Scotland, home for the last five years to Edywn Collins.

Speaking to Michael Odell, the one-time Orange Juice frontman looks back fondly yet unsentimentally over his career, and forward to the imminent release of his 10th solo album, Badbea, named after an abandoned clifftop settlement nearby.

“It’s an incredibly haunting place,” says Collins. “I first came here aged eight. Usually,  I am only concerned with right now and what’s happening tomorrow. The past for me is done. But this record does look back a little more than I’m used to doing.”

It was while walking on nearby Brora beach in 1977 that Collins had a vision for the jangly, witty yet subversive music he wanted to make. After what he calls a “terrible apprenticeship” with his first bands, Onyx and then Nu-Sonics, he went back to Glasgow and formulated Orange Juice with self-styled music svengali Alan Horne.

“I still remember that walk on the beach,” smiles Collins. “It felt like a real ‘now or never’ moment.” Orange Juice disbanded in 1985. But not before Collins had  made a reputation for himself by goading and challenging his frustrated paymasters. “You had to show these bastards you meant it,” he says.

“You form a band in a creative bubble and you have your own ideas of integrity. Then suddenly you’re on Top Of The Pops and you confront the machine. They wanted us to perform with dancers, doing a ripping up paper dance [along to “Rip It Up”]. We said no. They insisted. Drugs and alcohol were involved in our backstage preparations and, unfortunately, once our performance started, David McClymont fell off the stage. That caused us a lot of problems afterwards. It was deemed unprofessional by the BBC and by our paymasters at the record company.

“The Head of International at Polydor told me: ‘The bottom line, Edwyn, is if you don’t play the game you’re not going to have a career.’ I leant over the table and said, ‘Don’t you fucking bottom line me, mate.’ I used to attend meetings carrying a brolly and attaché case and I’d enter the building and say to reception staff, ‘Good morning, ladies. What have you been doing to advance the prospects of my group Orange Juice this fine day?’  I was arrogant as fuck. Some people at the record company found it funny, but most didn’t. Most of them were macho, stupid people and they needed the piss taken out of them.”

Collins suffered two strokes in 2005 and had to learn to speak, read and walk again. Was he daunted? “There were frustrations. I felt like a moron for six months – all I could say was four things: ‘Yes’, ‘No’, ‘Grace Maxwell’ and ‘The possibilities  are endless’. But to be honest, I felt lucky to still be here… I wouldn’t change anything. Never harbour regrets. You have to come near to your own end to truly value life.”

You can read much more from Edwyn Collins in the current issue of Uncut, out now with John Lennon on the cover.