Follow-up to Waterloo To Anywhere is nearly complete 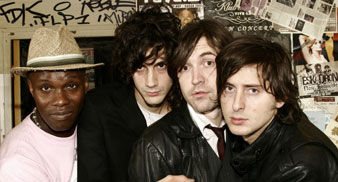 Dirty Pretty Things have announce details of their forthcoming second, as-yet-untitled, new studio album and the first single to be taken from it “Tired Of England”.

The band’s follow-up to their 2006 debut Waterloo To Anywhere will be released on June 30, with the single coming out one week prior on June 23.

The tracklisting of the forthcoming DPT album will be: