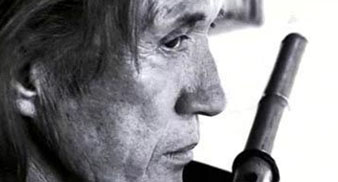 David Carradine (1936 – 2009), an old-school Uncut hero was found dead on Thursday (June 5), the causes of death still being investigated.

In tribute to the star of Kung Fu, The Long Riders, Boxcar Bertha and Kill Bill, here are some extracts from a 2003 interview by Damien Love, who met the actor prior to his appearance in Kill Bill Vol 2.

“UNCUT: Is it true that you introduced Bob Dylan to kung-fu?”

“CARRADINE: Well, Bob took some lessons. He didn’t really stick with it, but we had some fun together. My master used to come out to my house and teach me every morning, and I thought Bob could profit from it, so we went over to his place, and he and his kids took a few classes with us. It was pretty cool. Bob was funny, y’know – anybody who’s just beginning with kung-fu tends to be kinda funny, anyway, but he didn’t stick with it. But Bob’s an amateur boxer. He knows how to take care of himself. I know he seems like just a little wimpy guy. As a matter of fact, he used to spar with Quentin [Tarantino]. Yeah, Quentin is an amateur boxer himself… You okay?”

“CARRADINE: Yeah, it’s a funny image. Aside from the fact that Bob is about five foot eight, something like that, and Quentin is about six-five. But yeah, Dylan showed aptitude for the kung-fu. He was kind of a natural, actually. But, I don’t think it interested him enough. Bob had other fish to fry, other things to do.”

For the full story, click here for Uncut’s film blog