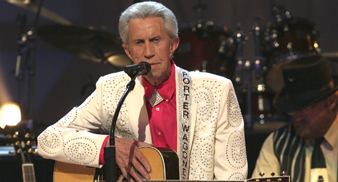 The rhinestone-clad pioneer of the Nashville country scene died from fatal lung cancer.

Wagoner’s signature hits included ‘A Satisfied Mind’, ‘Misery Loves Company’ and ‘The Cold Hard Facts of Life’ – began as a gospel singer in his native Missouri, his ambitions changing after witnessing Hank Williams‘ ‘Lovesick Blues’ at Nashville venue the Grand Ole Opry in 1949.

Wagoner released several themed concept albums through out the 50s, and by the late 60s had several Grammy Awards under his belt including two for Best Gospel Performance, one in ’67 and one in ’69.

Whilst hosting the hugely successful Porter Wagoner show on US TV, Wagoner introduced newcomer Dolly Parton as his new duetting partner in 1967. Together they were a huge hit, and recorded several records.

At it’s peak, his TV show was syndicated in 100 countries and attracted audiences of over 3 million.

They won several awards for their duets, including two Country Music Awards in 1970 and ’71.

The pair’s complex relationship deteriorated resulting with Wagoner suing Parton in the late 70s, however they settled out of court and remained friends until now.

In 2002, Wagoner was inducted into the Country Music Hall of Fame.

Wagoner’s recent career has included a new album ‘Wagonmaster’ released this year, as well as playing the support slot for The White Stripes when they played Madison Square Gardens.