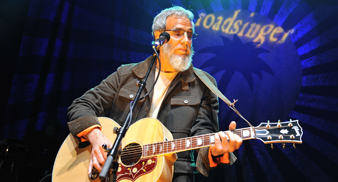 Yusuf Islam, known previously as Cat Stevens has announced his first UK live dates since his Magikat tour in 1976.

Yusuf, who released new albums ‘An Other Cup’ and ‘Roadsinger’ in recent years, will now return to the live arena, playing four concerts in November, starting in Dublin and ending in London.

As well playing classic hits such as “First Cut Is The Deepest” and “Wild World”, the songwriter will also premiere songs from Moonshadow: the musical.

Currently auditioning for the parts, Yusuf extols his passion for the theatre, saying in a statement today: “It’s taken a long time to arrive, but it’s always been a dream of mine to write a musical,” he said. “Growing up in the West End of London, surrounded by theatres and shows, obviously left a strong impression on me. I originally wanted to be a composer, not a pop star.”