Bruce Springsteen, The Rolling Stones, The Raconteurs, Woodstock and more star in the new Uncut

Our new issue is on sale from June 13 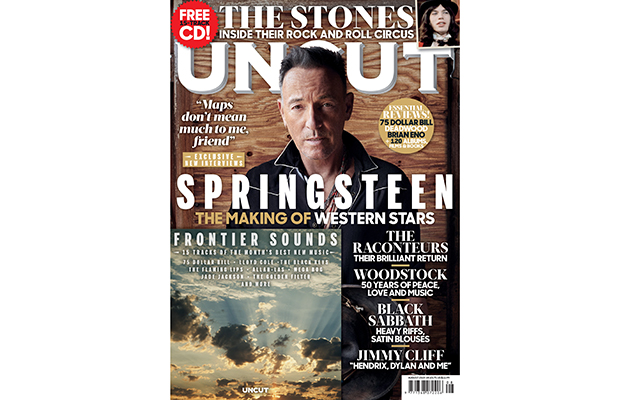 ‘‘It was a chance to see if we could create the kind of world for which we’d been striving throughout the ’60s. That would be our political statement – proving that peace and understanding were possible and creating a testament to the value of the counterculture.” Welcome, then, to the new issue of Uncut, in shops from Thursday, June 13 and available to buy now.

That’s Michael Lang, organiser of Woodstock, reflecting on the ideals and motivations behind his legendary three-day festival as it celebrates its 50th anniversary. Such anniversaries, of course, are a critical motor for both the music industry at large and also for magazines such as Uncut. This month alone, in our Archive reviews section, you’ll find various anniversary editions under the spotlight, from Sigur Rós (2oth) to Ian Dury (40th) and The Grateful Dead (5oth). For Lang and the festival’s photographer Henry Diltz, though, they gratifyingly still see the spirit of Woodstock prevailing to the present day: “Woodstock didn’t signal the end of hippies,” says Diltz. “They went on to have kids and grandkids, so that whole movement is still alive in the form of people wanting to save the animals and the environment, with organisations like Greenpeace. That’s all part of the hippie generation.”

There is another milestone, of sorts, in our cover story as Stephen Deusner takes a long and deep trip into Bruce Springsteen’s first studio album in five years, Western Stars. A bold, big-hearted record, its dusty tales of movie stuntmen, wayfarers and desert denizens all feature a sense of yearning for human connection; a wish to “get to that place where we really wanna go” that Springsteen has been singing about since “Born To Run”. That Western Stars is released – finally – just a few months before Springsteen turns 70 adds an extra level of pathos to Stephen’s excellent piece, which includes the sobering thought: “At this stage in your life, you give up your dreams of immortality.”

Meanwhile, on another trip entirely, and with a little help from Mick, Keith and Bill, we celebrate the colourful hijinks perpetrated by rock’s most illustrious grandees at The Rolling Stones’ Rock And Roll Circus; John Robinson heads to Bristol for a seriously funny encounter with BEAK>; and Peter Watts reopens the doors on the infamous Flamingo Club for some proper old-school R&B shenanigans. Elsewhere, you’ll find Jimmy Cliff, Black Sabbath, Rickie Lee Jones, The Raconteurs, Doves, R.E.M., Billy Childish and The Raincoats, as well as a wealth of new music from Trash Kit, Mega Bog, 75 Dollar Bill and House And Land.

What else? Our free, 15-track CD contains a carefully curated selection of the best current music – including David Berman’s mighty Purple Mountains, The Black Keys, Allah-Las, The Flaming Lips and Lloyd Cole, among other gems. As I mentioned last month, 2019 is turning into a vintage year for new music. In the next issue, there’ll be more on one of my favourite albums of the year…