Cate Blanchett and Rooney Mara star in this outstanding drama 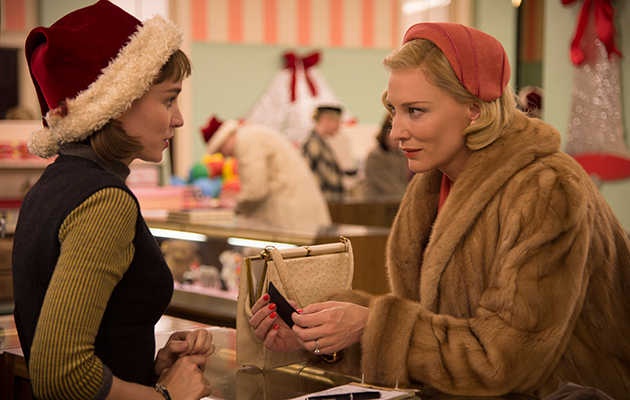 Haynes is a skilled chronicler of while middle class women’s emotional pain – from Safe to Far From Heaven and Mildred Pierce. For Carol, though, Haynes moves expertly onto another level. Set across the Christmas and New Year of 1951/2, his film documents the lesbian relationship between Carol and Therese, a young shop assistant, in a less tolerant society. Visually, Haynes delivers a typically lavish experience – from the cars to the clothes, the film has been meticulously dressed down to the smallest detail. It’s so rich; it’s a little like drowning in double cream. But Carol is more than just about the furs and furnishings: this is quiet, significant cinema from a master filmmaker operating at the peak of his powers.

Rooney Mara plays passive Therese Belivit, who relieves her dreary life at Frankenberg’s with an extra-curricular interest in photography. Working the toy counter in the run-up to Christmas, she meets Carol Aird (Cate Blanchett): a well-heeled socialite who is looking for a doll as a gift for her daughter. “The Bright Betsy. She cries and wets herself.” Carol leaves her gloves on the counter, giving Therese an opportunity to contact her. Soon, they lunch together: though Therese admits, “I barely even know what to order.” The besotted Carol murmurs, “What a strange girl you are. Flung out of space.”

The early part of Carol focuses on the unlikely relationship between the two. Therese has an oddly defensive stillness about her; as if she is waiting for something to happen. Carol, meanwhile, is in perpetual motion: a swish of her fur coat, a turn of her heel, carried along on restless, flickering energy. As the film progresses, we learn that Carol is more fragile than she first appears. Perhaps she is worn-down by attempts to suppress her nature; yet, with Therese, she is determined to pursue her instincts, at whatever cost. Haynes is reunited here with Blanchett – the hopped-up “electric” Bob from his Dylan biopic, I’m Not There – who conveys a kind of heavy-lidded sadness behind her immaculate movie star looks. Although Carol is essentially melodrama, Blanchett is thankfully more reined in here than in Blue Jasmine. It transpires she is in the final stages of a loveless marriage to Harge (Kyle Chandler). Taking off with Therese in her cream-coloured Packard convertible, Carol heads off on a road trip that reaches its conclusion in a motel in Waterloo, Iowa.

Haynes fifth consecutive period piece, Carol is based on Patricia Highsmith’s 1952 novel, The Price Of Salt. The script – adapted by Phyllis Nagy – carries much of Highsmith’s elegant wordplay. Carol and Therese are described as being “like physics – pinballs, bouncing off each other.” Looking over Therese’s photographs, Carol notes, “I have a friend who tells me I should be more interested in humans.” As one character, a movie buff, declares, “I’m charting the correlation between what the characters say and what they feel” – which is very true of this excellent film. Critically, Haynes mimics the reserve of the era, depending on glances or gestures to communicate the powerful, dangerous feelings that pass between Carol and Therese.

CAROL OPENS IN THE UK ON NOVEMBER 27