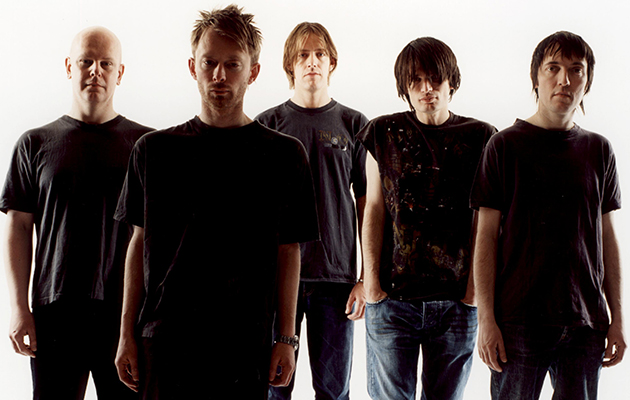 After 10 years of “not being able to really connect with anything,” Thom Yorke has guided his bandmates into radical new territory. As Kid A arrives, however, JAMES OLDHAM discovers how Radiohead’s reinvention was critical to the band’s survival. Are all the bandmembers delighted with the change of direction? “I don’t really know anything about the Aphex Twin,” claims Colin Greenwood…

“You have no-one to blame but yourselves and you know it.”
Message on the sleeve of Kid A

Having already been uniformly heralded as the most important record of its generation, OK Computer was released on June 16, 1997. It took just six days for Thom Yorke to become disillusioned with it. On Saturday, June 21, Radiohead played their biggest gig to date in front of 40,000 people at the RDS in Dublin, and it sent Yorke tumbling into an abyss of loathing and self-doubt.

There’s a song on the forthcoming Radiohead album called “How To Disappear Completely” that documents these emotions. Its key lines – “I’m not here/This isn’t happening” – capture his mental state at that point, as well as offering a clue as to what happened as the rest of the promotional schedule unfolded. Yorke may claim now that all the plaudits didn’t “mean a fucking thing”, but clearly there was a price to pay.

“I had this thing for a while,” he reveals, from the confines of a café on Oxford’s Cowley Road, “where I was falling through trap doors all the time into oblivion – like acid flashbacks. I’d be talking to someone and then I’d be falling through the earth. It went on for months and months, and it was really weird. It was all happening towards the end of OK Computer… the end of the ‘promotional period’.”

“That sounds like an MTV question,” he laughs. “I was a complete fucking mess when OK Computer finished! I mean, really, really ill.”

Do you know why?

“It was just going a certain way for a long, long, long time and not being able to stop or look back or consider where I was, at all. This was for, like, 10 years – not being able to really connect with anything. I was basically just becoming unhinged… completely unhinged.”

By the end of 1998, Yorke was close to collapse. Suffering from writer’s block, he got “the horrors” whenever he picked up a guitar. The band, aware that something had to change, decided that from then on, the way they wrote, recorded and promoted their music had to change. They had to start again from scratch.

Next week, you’ll be able to hear for yourself what that entailed. Three years on from OK Computer, Kid A is the sound of a band struggling to surpass a record with a critical and cultural importance that is unmatched in recent memory. Recorded in four studios and three countries over a 12-month period rife with false starts and inter-band friction, the very least you can say about it is that it represents a complete and definite break from the past.

It trades the ambitious, heavily treated guitar sounds of its predecessor for a skeletal electronic framework of meandering ambient clouds and fractured, subsumed vocals. Supported by brittle drum patterns and keening static, the songs drift by with minimal human input, utterly at odds with their live counterparts. If OK Computer vividly articulated Yorke’s anxieties, then Kid A shrouds them in sonic fluff. It’s almost as if Yorke has chosen to erase himself from the group completely.

A few tracks stand out – and it’s no surprise they’re the ones that are more propulsive and conventional in tone. The fuzz-bass and free-jazz histrionics of “The National Anthem” recall the excesses of Primal Scream’s XTRMNTR, while the warped acoustics of “Optimistic” push towards the sound of Isn’t Anything-era My Bloody Valentine, but these are exceptions within the general electronic haze. It might be the record Radiohead had to make, but it won’t necessarily be a record you’ll want to listen to. Although the rest of the band dispute it, Kid A is very much the sound of Thom Yorke working through his own neuroses. For better or worse, it’s his record.

Welcome to a very special issue of Uncut, as we celebrate Bob Dylan’s 80th birthday. As you might imagine,...
Read more
Advertisement
Album