The Making Of… Slade’s Merry Xmas Everybody 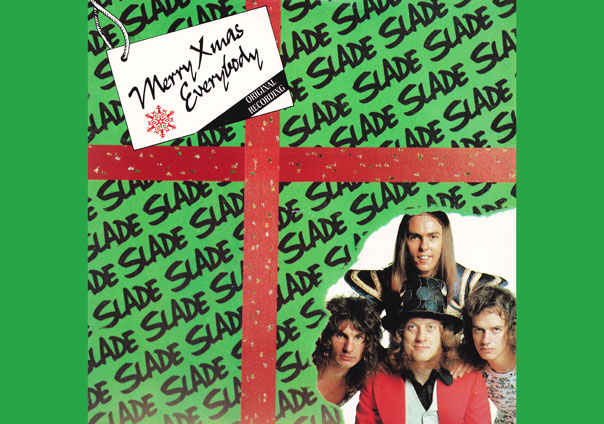 From Uncut’s January 2013 issue (Take 188)… A 20-minute shower and a few drinks down the pub produce a deathless seasonal smash. “Each year it gathers new momentum,” says Dave Hill. “Talk about a pension…” Words: Peter Watts

Slade’s “Merry Xmas Everybody” might not be the first Christmas song, it might not even be the best Christmas song, but it’s surely one of the most important, the most memorable, the most successful and the most, well, Christmas-y. It was released in December 1973 – as were Wizzard’s “I Wish It Could Be Christmas Everyday” and Elton John’s “Step Into Christmas” – and sold half a million in pre-orders alone as it surged to the top of the chart. It was still No 1 in the middle of January. Not bad for a song that was written in the shower and recorded in a sweltering New York studio with John Lennon’s harmonium while the band’s drummer – recovering from a serious car accident – could barely remember how to keep time.

In the early ’70s, Slade were untouchable. This was their third No 1 in 1973 alone, and their sixth overall. Years of graft had helped the band develop a serious work ethic, but they also retained a gift for the common touch thanks to their decision to never stray far from their Black Country roots. This was reflected in “Merry Xmas Everybody”. The bovver boy choruses and wacky image might have pigeonholed them as a novelty act – and a Christmas song doesn’t exactly help in that regard – but Jim Lea’s simple melody, Dave Hill’s chunky chords and Noddy Holder’s lyrics contain the perfect blend of nostalgia and optimism that help define the Christmas experience for many. “Are you hanging up a stocking on your wall?/Are you hoping that the snow will start to fall?” bellows old mutton-chops, “Look to the future, it’s only just begun.”

“It was a miserable time, 1973,” says Holder, who wrote the words after an evening in a Black Country pub. “I was trying to cheer people up.” What sort of curmudgeon wouldn’t get a Christmas tingle at that? PETER WATTS

Jim Lea, bass and harmonium: We’d had this string of hits and I was worried about getting the next No 1. I was in the shower trying to think of a song. My mother-in-law the year before had said why don’t we write a song like “White Christmas”, something that can be played every year.

Noddy Holder, vocals and guitar: It came out because Jim’s mother-in-law had said why have you never brought out a record that can come out every year like a birthday song or a Christmas song.

Lea: I was furious, I thought it was a stupid idea. But then I decided to do it. I started thinking of words and wrote the verse and was trying to find a chorus. This took about 20 minutes while I was in the shower.

Holder: I was in a writing session with Jim and he remembered a song I’d written back in 1967. It was the first song I’d ever written. It was a hippy dippy flower power song called “Buy Me A Rocking Chair” and the original chorus had gone [to the tune of “Merry Xmas Everybody”] “So won’t you buy me a rocking chair to watch the world go by, buy me a looking glass to look me in the eye-ee-ee.” The band hated it, so it was binned. But Jim remembered it and had added this new melody for the verse. He said why don’t we make it a Christmas song?

Lea: I’ve a good memory and recalled that Nod had played me this scrap of a song five years before about a rocking chair and I put that in. I don’t think Nod was too pleased, he wanted to do something with the chorus himself some time.

Holder: So I went away and wrote some Christmas lyrics. I went to the pub, got a bit pissed then went back to my mum and dad’s place and wrote the lyrics. I played it the next day to Jim and he said, “That’ll work.”

Dave Hill, guitar: Nod had a few beers and wrote the lyrics one night in his mum’s front room and his capture of humour on that song is so typical of what Christmas is like in this country.

Holder: We took it to the band and rehearsed it, but they weren’t sure. Nobody really did Christmas songs then. Lennon had done one the year before, but he was Lennon. Little did we know that that year Wizzard were doing one and so was Elton John. But we played it to Chas Chandler [manager and producer] and he loved it. He said Polydor will be over the moon, but we won’t tell them we’re doing it until we’ve finished it, we’ll just tell them we’ve got a new record. At this point, July ’73, Don [Powell] had his bad car crash and was in hospital for six weeks.

Don Powell, drums: We were No 1 with “Skweeze Me Pleeze Me” and I had the crash. I don’t remember what happened at all. In 1974, I went to see a brain specialist and he said I’ll never remember what happened, the brain had just switched off before the accident. He said “What do you want to remember for, anyway?”

Holder: Don couldn’t play and his memory was shot so we took him to America to teach him to play again – people thought he’d never play drums again. It was very difficult for the next few years with Don.