The Making Of David Bowie’s “Starman”

The inside story of Bowie's early classic 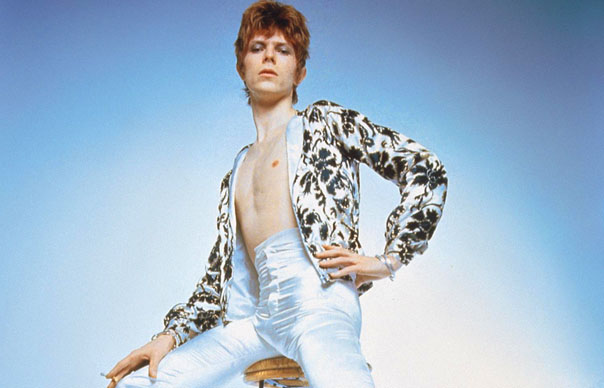 Producer Ken Scott, drummer Mick ‘Woody’ Woodmansey and photographer Mick Rock are among the key players who recall the making of Bowie’s 1972 hit, “Starman”. This originally appeared in Uncut Take 145.

You’ve no idea how much trouble we had getting exposure before Ziggy,” says David Bowie’s ex-wife, Angie. “It was a constant slog uphill. People didn’t want to know us. David had been knocking his head against the wall as a folk singer, then he decided he needed a band.”

It’s easy to forget this, but in the summer of 1972, David Bowie was best known as the strange kid with the curly perm who’d scored a novelty hit three years earlier with “Space Oddity”. Now here he was as alien rock star Ziggy Stardust, with a quilted jumpsuit, lace-up boots and neon-coloured hair. Inspired by ’50s rock’n’roll, Marc Bolan, TS Eliot, Vince Taylor, A Clockwork Orange and Japanese kabuki theatre, it’s fair to say that Ziggy was a more ambitious proposition than Bowie’s folkier incarnation. “I packaged a totally credible, plastic rock’n’roll singer,” he said later. “Much better than The Monkees could ever fabricate.”

With guitarist Mick Ronson, bassist Trevor Bolder and drummer Woody Woodmansey, Bowie recorded The Rise And Fall Of Ziggy Stardust And The Spiders From Mars in late 1971 and early 1972. A modestly attended UK tour followed that February. But two key moments around the …Ziggy album release in June helped turn Bowie into a puissant rock star.

The first was on June 17, at Oxford Town Hall, when photographer Mick Rock snapped Bowie performing an ‘electric blow-job’ on Ronson’s guitar. Then, on July 6, the Spiders played “Starman” on Top Of The Pops, and Bowie – striking in his rainbow coloured suit and androgynous make-up – draped an arm limply across Ronson’s shoulder. The performance inspired a generation of musicians, and “Starman” peaked at No 10, while Ziggy itself stayed in the album charts for two years. Bowie never looked back. “[Starman] is four minutes and ten seconds of major achievement,” John Peel wrote in Disc. “Jesus, it feels good.”
ROB HUGHES

Ken Scott, producer: I’d worked with David on Space Oddity and The Man Who Sold The World, and always thought, ‘Yes, he was a nice guy and relatively talented.’ But a superstar? Never. But after he’d asked me to co-produce Hunky Dory with him, his publisher and myself were over at my house going through the demos and it dawned on me for the first time that this guy could be a superstar.

Angie Bowie: They made a great job of Hunky Dory, but …Ziggy Stardust was when the band came together in a way that everyone had their chops down. And Mick Ronson started to emerge as this amazing guitarist. The band would come over to our place at Haddon Hall and go down into the basement to rehearse. They more or less lived there. [Fashion designer] Freddie Buretti worked for this Greek tailor called Andreas, so I’d brought Freddie and his girlfriend, Daniella [Parmar], down to Haddon Hall. David and Freddie then got together and designed those outfits for the Ziggy Stardust thing. David designed the bomber jackets and the tight-fitting pants with the lace-up boots. I bought a lot of clothes for myself, but kind of laid them out in a way that, if David nicked them and wore them, it might not be a bad idea.

Mick ‘Woody’ Woodmansey, drums: The whole Bowie and the Spiders look was David’s idea. We’d watched A Clockwork Orange, seen Alice Cooper live and it was a fusion that fitted the whole space/alien concept. At first we were very reticent about the outfits and the make-up. Mick Ronson hated the outfits. In fact, he packed his bags and left. David asked me to go after him and handle it. I spent a good hour or so on Beckenham train station with him!

Scott: [Laughing] I look at pictures of them these days and feel so bad about being a part of it! But hey, it suited the times. When it all came down, it was, ‘Wow, this is great! This is really adding something to the recording, bringing a sense of spectacle to it all.’ Looking back on it, I mean, my God, what were we thinking? But it really caught on after a while. The …Ziggy sessions started just a few weeks after we’d finished Hunky Dory [September to November 1971]. David came up to me and said: “Right, we’re going to record another album. But I don’t think you’re going to like this one as much, ’cause it’s more rock’n’roll.” All of those sessions were the same: the band would quickly learn a song, we’d get it in a couple of takes, we’d do some overdubs and it was done.

Woodmansey: There had been one or two tracks on Hunky Dory where I’d given poor Ken Scott a bit of verbal abuse about the sound, saying, “I could get a better sound out of a bag of crisps and a cornflake packet!” When we turned up to do …Ziggy, they asked me to go down in the studio and check if the drums were set up correctly. When I got there, there was no kit. Instead, in the middle of the floor was a cornflake packet, two coffee cups and a bag of crisps, all mic’d up properly and a pair of sticks lying beside them. All the band and crew were falling around in hysterics.

Scott: It was actually all different-sized cornflake packets. You could get mini ones and big ones, so I sent the tea boy out to get as many different sizes as he could. Then myself and the roadie set them up, exactly like a drum kit. Woody walked in and just fell on the floor. We went back into the studio to do “Starman” in January ’72, after we’d done the rest of the album. Someone at RCA had told us: “There’s no single. Go back in and do one.” It came together very quickly, though, maybe in just one day.

Woodmansey: “Starman” was along the same lines as “Space Oddity” and “Life On Mars”, two other favourites of mine. It’s the concept of hope that the song communicates. That “we’re not alone” and “they” contact the kids, not the adults, and kind of say “get on with it”. “Let the children boogie”: it’s music and rock’n’roll! It made the future look better.

Scott: Mick Ronson did the arrangements for strings and guitar. That morse code sound is actually a piano and two guitars, an octave apart, then we bounced them all down together to make one track. It seemed to make sense in that there was this idea of something coming from some distant planet. So we then put it all through a phaser. There is one weird thing about it that I’ll bring up. There are two versions of “Starman”: one a loud morse code version and one a quiet version. And I only ever remember doing one mix of it, and can’t tell you which was the one I did. I’ve no idea where the second one came from. So if anyone reading this can come up with an answer, let me know!

Mick Rock: I think David saw “Starman” as the ultimate follow-up to “Space Oddity”, which had been a hit in ’69. But you can see all that ‘star’ stuff he was projecting like mad then: “Starman”; “Prettiest Star”; “Moonage Daydream”. He wanted it bad, he really did. At one point when I was interviewing him he said: “Y’know, I’m so focused on what I’m doing, Mick, that if you were to come and tell me my best friend had just died, I’d probably say, ‘Oh, that’s really sad’, then go right back to work.” That was how he thought of himself. It was important for him to be a star. People forget that Ziggy Stardust was all projection, because he wasn’t a star at the moment he recorded the single and the album. “Starman” was the set-up. That song was the reason there were a thousand people at Oxford Town Hall [June 1972].

Angie Bowie: Mick Rock was moving around at the side of the stage that night. After a while he jumped down and started taking shots. Then there was a break in one song and I saw David walk away from the mic, go to the back of the stage, turn around and kind of look at Mick. Ronno was playing away and not paying any attention. Mick Rock didn’t know what the hell he meant, but he sort of concentrated.

Rock: David didn’t pre-warn me about that shot. He told me later that he wasn’t actually intending to go down on his knees. And if you see the actual shot, he’s not; his feet are splayed. All he was trying to do was bite Mick’s guitar. But the way Mick was swinging his guitar around, David had to take up that position. Maybe it’s the delicate way he’s clutching Mick’s cheeks that caused the fuss.

Angie Bowie: David looked like he was helping him play it with his mouth. It was brilliant. Then I saw flash flash flash! Five flashes in a row from Mick Rock. Those things are gifts.

Rock: I was at the perfect spot at the perfect moment. It was too late to get it in the papers, so David and the management actually bought a page in Melody Maker to say thank you to his rising fans. The timing couldn’t have been better. Of all the shots of him, this is the one that lingers longest in the memory. It’s an incredibly durable image. Then, after that, the audiences grew very fast. By the London Rainbow gigs in August, he did two nights, which he obviously couldn’t have done before “Starman”. That song fuelled everything.

Woodmansey: “Starman” was the first Bowie song since “Space Oddity” that had mass appeal. It spearheaded the whole Ziggy Stardust concept both musically and visually. Appearing on Top Of The Pops was like reaching the summit of Everest. I recall waiting to go on, standing in a corridor, and Status Quo were opposite us. We were dressed in our clothes and they had on their trademark denim. Francis Rossi looked at me and said: “Shit, you make us feel old.” The success of ‘Starman’ really opened it all up for us. Everything changed.