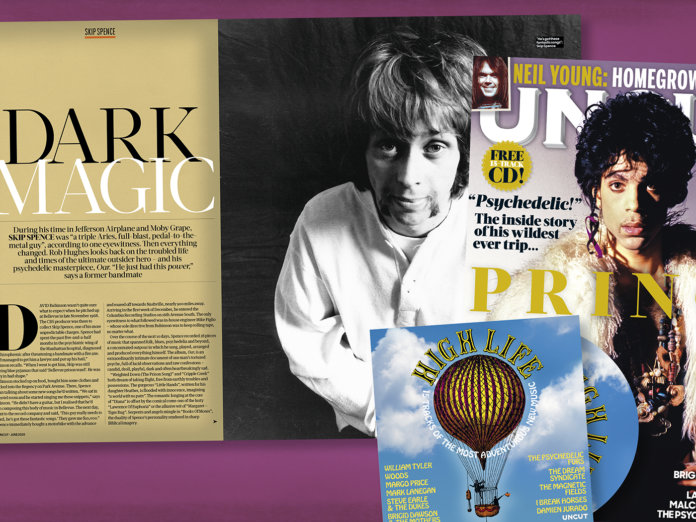 The latest issue of Uncut – in shops now or available to order online by clicking here – includes a deep dive into the troubled life and brilliant music of the ultimate outsider hero, Skip Spence, and his psychedelic masterpiece Oar. During his time in Jefferson Airplane and Moby Grape, Spence was “a triple Aries, full-blast, pedal-to-the-metal guy”, according to one eyewitness. Then everything changed, as Rob Hughes discovers…

David Rubinson wasn’t quite sure what to expect when he pitched up at Bellevue in late November 1968. The CBS producer was there to collect Skip Spence, one of his more unpredictable charges. Spence had spent the past five-and-a-half months in the psychiatric wing of the Manhattan hospital, diagnosed as schizophrenic after threatening a bandmate with a fire axe.

“I’d managed to get him a lawyer and put up his bail,” Rubinson recalls. “When I went to get him, Skip was still wearing blue pyjamas that said ‘Bellevue prison ward’. He was really in bad shape.”

Rubinson stocked up on food, bought him some clothes and checked into the Regency on Park Avenue. There, Spence began talking about some new songs he’d written. “We sat in the hotel room and he started singing me these snippets,” says Rubinson. “He didn’t have a guitar, but I realised that he’d been composing this body of music in Bellevue. The next day, I went to the record company and said, ‘This guy really needs to record, he’s got these fantastic songs.’ They gave me $10,000.”

Spence immediately bought a motorbike with the advance and roared off towards Nashville, nearly 900 miles away. Arriving in the first week of December, he entered the Columbia Recording Studios on 16th Avenue South. Over the course of the next 10 days, Spence recorded 28 pieces of music that spanned folk, blues, psychedelia and beyond, a concentrated outpour in which he sang, played, arranged and produced everything himself. The album, Oar, is an extraordinarily intimate document of one man’s tortured psyche, full of lucid observations and raw confessions – candid, droll, playful, dark and often heartbreakingly sad.

“Skip was a complex person,” reckons guitarist and ex-Jefferson Airplane colleague Jorma Kaukonen, who’d visited Spence in Bellevue. “Whatever unresolved emotional issues he had, he was able to explain his way of looking at the world to us. Oar is a fantastic album, not the work of a quote-unquote lunatic.”

“Before he turned into this dark character, Skippy was so positive and full of energy,” recalls former Moby Grape bandmate Peter Lewis. “He just had this power.”

“Skip was a triple Aries, full-blast, pedal-to-the-metal guy,” marvels Grape guitarist Jerry Miller. “Never a second thought about anything, just go-go-go. And one hell of a frontman.”

Kaukonen remembers Spence as “somewhat mercurial. I guess today that he might be diagnosed as bipolar on some levels, but everyone in Jefferson Airplane always thought he was so cool. A ray of sunshine. And immensely talented.” Moby Grape drummer Don Stevenson agrees. “I just thought Skip was amazing,” he says. “He was like a neon sign.”

You can read much more about Skip Spence in the latest issue of Uncut, on sale now with Prince on the cover.