Hunter Davies, who in 1968 wrote the first authorised biography of The Beatles and now more than 50 years on has compiled and edited The John Lennon Letters, admits in his introduction that he has for the purposes of the book ‘rather expanded the definition of the word letter’, which immediately sounds bit slippery, especially when he also describes some of the material he has unearthed as ‘notes and lists and scraps’. This sounds rather unpromising, as if Davies is preparing the reader for disappointments to come. 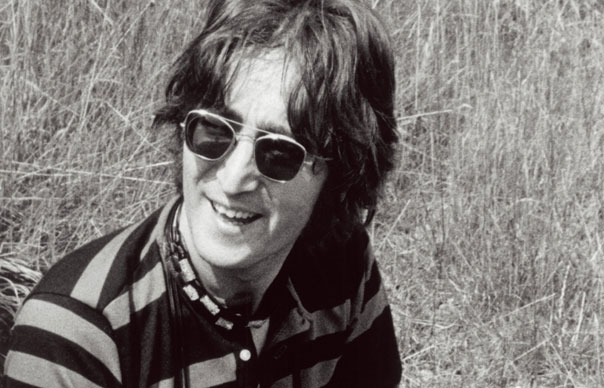 Hunter Davies, who in 1968 wrote the first authorised biography of The Beatles and now more than 50 years on has compiled and edited The John Lennon Letters, admits in his introduction that he has for the purposes of the book ‘rather expanded the definition of the word letter’, which immediately sounds bit slippery, especially when he also describes some of the material he has unearthed as ‘notes and lists and scraps’. This sounds rather unpromising, as if Davies is preparing the reader for disappointments to come.

Flicking through the book’s 400 pages, you’ll quickly notice that the bulk of the correspondence collected here consists mainly of hastily scribbled postcards, letters dashed off in apparent haste, to family, friends and fans, scribbled nonsense a lot of them, at least at first glance. They are arranged chronologically, and the heart as they say sinks when you get to Lennon’s latter years, that time he spent largely in domestic seclusion in the Dakota building, a house husband and doting father, when all he seemed to write was shopping lists, or instructions to helpmeets and assistants, demanding this and wanting that.

Your initial impression therefore confirms the views of those critics of the book who’ve dismissed it as not much more than an exercise in barrel-scraping, the apparent triteness of much of the content diminishing rather than enhancing Lennon’s legend, at least two of them – Jarvis Cocker in The Observer and Neil McCormick in The Daily Telegraph – coincidentally suggesting that a more accurate title for it would have been The John Lennon Post-it Notes, such is the dearth, as they saw it, of anything collected here of obvious substance, clearly and spectacularly illuminating about Lennon’s life, personality, music and other related matters of significant import, the amassed correspondence revealing little more than the fact that Lennon’s spelling was fairly atrocious and he liked to doodle.

In the circumstances, you may approach the book, as I did, braced for a let-down, expecting it to be a bundle of nothing, padded out by a join-the-dots biography of Lennon and The Beatles, a familiar saga, re-told for the umpteenth time. What a turn-up, then, to find on closer reading that the book is far from being merely an anthology of the mundane, trivial and inconsequential. It is, in fact, fascinating, and by the end of it you wish more of Lennon’s correspondence had survived, and not so much of it lost, destroyed, mislaid.

As Davies explains, a lot of Lennon’s letters have ended up in the possession of private collectors, who acquired them at auction or high-end memorabilia sales, many of them sold on by the people they were originally written to, like the letter he wrote to Sandra Clark in october, 1963. As a 14-year old Beatles fan, she wrote to Lennon, not expecting a reply. ‘I was in tears when I got it – which is why the letter got stained,’ she tells Davies. She kept the letter for 20 years, a presumably treasured possession. In 1982, however, married with three young children and strapped for cash, she sold it for £440 to buy a new washing machine and with what was left put down a deposit on a new cooker.

The earliest letter here dates from 1951 – a touching note to Lennon’s aunt, Harriet, thanking her for a Christmas present, a towel with his name on it (‘The best towel I’ve ever seen!’). Letter 285, as it is designated, which appears a couple of hundred pages later, is a reproduction of the scrap of paper on which Lennon had scribbled his autograph for Ribeah Love, who worked on the switchboard of the Record Plant, where he’d been recording Double Fantasy. It was the last thing Lennon ever wrote. Twenty minutes later, outside the Dakota, he was shot dead by Mark Chapman.

In between, there are examples of his early precocity – pages from The Daily Howl, for instance, a home-made newspaper he produced when he was 12 or 13, which anticipates so much of the surreal humour, absurd wordplay and literary buffoonery to come, with its echoes of Lear, Lewis Carol and Spike Milligan. There are copious letters and notes to his family, with whom he often struggled to stay in touch, often by the tone of his replies to letters unseen by us, to their dismay. They often felt estranged by his fame as much as he was often annoyed by their demands upon his time. Much of his correspondence was good-natured, bantering, full of in-jokes, sometimes baffling asides, free-associative bollocks and hilarious non-sequiturs (‘Pass me that cat, I’m starving!’). Just as often, there are letters that give full voice to an anger that regularly consumed him, at which point they are aggressive, sarcastic, bitter and not always very pleasant, like the infamous 1971 ‘John rant’, addressed to Paul and Linda (‘…get that into your pretty little perversion of a mind, Mrs McCartney’).

There are vulnerable, sentimental and sometimes self-pitying letters to Cynthia, including one written in August 1965, from the rented house in Hollywood where The Beatles were taking a break from an American tour. He is apparently wracked with guilt over his neglect of first son, Julian.
‘I miss him more than I’ve ever done before,’ he writes. ‘I spend hours in dressing rooms and things thinking about the times I’ve wasted not being with him,’ he continues. ‘Those stupid bastard times – it’s ALL WRONG! ‘I’ll go now cause I’m bringing myself down thinking about what a thoughtless bastard I seem to be – and it’s only 3 o’clock in the afternoon, and it seems the wrong time of day to feel so emotional – I really feel like crying – it’s stupid and I’m choking up now as I’m writing – I don’t know what’s the matter with me.’

Some of the most revealing letters are to his cousin Liela, with whom he kept up an irregular if usually lively correspondence. The last of his messages to her, now inescapably poignant, is dated January, 1979.

The John Lennon Letters are published by Weidenfeld & Nicholson, the hardback priced at £25, the e-book version at £12.99.