Terrence Malick’s To The Wonder

It’s an odd week to release a film, I guess, as no one’s entirely paying attention. The usual brouhaha surrounding this coming Sunday’s Oscars ceremony has been chewing up a lot of film content in magazines and on websites, while elsewhere the internet seems preoccupied with Star Wars spin-offs, Star Trek and Sin City posters and whether or not Sam Mendes will direct the next Bond film. 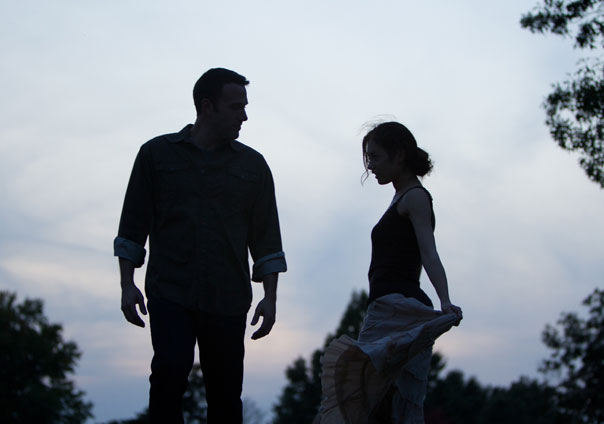 It’s an odd week to release a film, I guess, as no one’s entirely paying attention. The usual brouhaha surrounding this coming Sunday’s Oscars ceremony has been chewing up a lot of film content in magazines and on websites, while elsewhere the internet seems preoccupied with Star Wars spin-offs, Star Trek and Sin City posters and whether or not Sam Mendes will direct the next Bond film.

Of the films coming out this week in the UK, many offer a very specific respite from the Oscar chat. Apart from a Guillermo del Toro produced horror movie, Mama, and the Wachowski’s $100 million art film Cloud Atlas, there’s a zombie film shot in Yorkshire (Before Dawn), a documentary about Yoga (Breath Of The Gods) and an Indian crime film (Gangs Of Wasseypur).

The best of the lot, though, is To The Wonder – Terrence Malick’s latest, which arrives with little hoo-ha. This is Malick’s third film since The Thin Red Line 15 years ago, and it feels as if with each new film the tremendous amounts of goodwill Malick accrued during his 20-year absence is gradually diminishing. 2005’s The New World lustrous retelling of the Pocahontas story came and went inside a week. Tree Of Life – in fact, quite a sharp story about a father and son – was roundly chastised for Malick’s unfashionable views on God and religion. Presumably, To The Wonder isn’t likely to win Malick any new fans. That said, it’s stuck with me rather stubbornly in the month or so since I saw it.

“We climbed the steps to the Wonder,” says Olga Kuylenko in whispered voiceover, as she and boyfriend Ben Affleck walk into the grounds of the monastery located on top of Mont Saint-Michel. Everything is bathed in a soft, blue-grey light as Malick’s camera follows the lovers walking through the grounds, Kuylenko gently running a hand across the top of a hedge of box trees, before they stop to marvel at a rose in bloom. As with Tree Of Life, To The Wonder is unashamedly a film about religion and love, framed within the confines of a smaller, more intimate story. Malick’s film follows Neil (Affleck) and Marina (Kuylenko) as they drift in and out of love, first in Paris and then in Malick’s hometown of Bartlesville, Oklahoma, a place of wide-open skies, seemingly caught in endless summer twilight. Neil is practical, if remote; Marina is “a little dreamer.”

A second thread follows Javier Bardem’s Father Quintana as he experiences a crisis of faith. This strand, as Quintana ministers to the sick and poor of Bartlesville, feels the least satisfactory. Even for a film as airy as this, there’s little to anchor Quintana to the main narrative. As is his wont, Malick cut a lot of footage (and performances from Jessica Chastain, Rachel Weisz, Michael Sheen and Barry Pepper) from the finished film, and I wonder whether there are specific linking scenes Malick thought fit to lose that might actually have served to connect the two storylines more explicitly.

The narrative – as slight as it is – drifts by in a series of loosely connected montages, as serene and graceful as you’d expect from Malick. This is an experimental art film, beautifully shot using natural light, with Malick’s camera in a state of constant movement, catching scenes of natural beauty but also finding something to marvel at in more mundane events; Malick turns a trip to the local supermarket into cinematic rhapsody.

At times, though, it veers towards self-parody. “Where are we when we’re there?” asks one character in voiceover. “Stop being so serious,” admonishes another, advice Malick himself could perhaps have done with.

To The Wonder opens in the UK on Friday, February 22