Springsteen manager Jon Landau: “Bruce has an ability to dial into the moment” 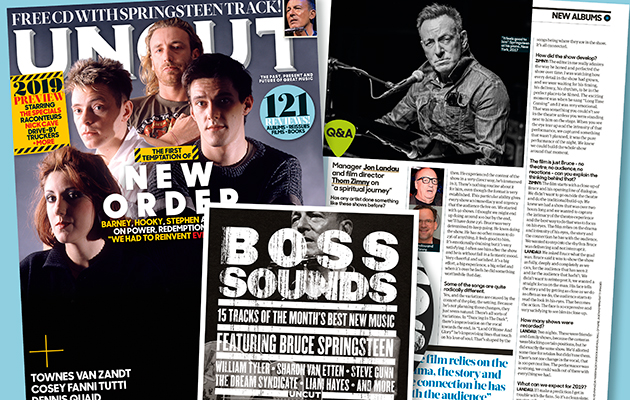 The latest issue of Uncut, in shops now or available to buy online by clicking here, features an in-depth review of Springsteen On Broadway – both the film and its soundtrack.

The magazine comes with a free 15-track CD featuring the Springsteen On Broadway version of “The Ghost Of Tom Joad”.

There is also a Q&A about the project with Bruce Springsteen’s manager Jon Landau and the film’s director Thom Zimny. You can read that in full below:

Has any artist done something like these shows before?
LANDAU: None of us have been able to think of a direct comparison. It’s a performance piece, written from beginning to end; there have been a few changes of a line here and there, but it’s unique. What makes it unique is the underlying spiritual thread that runs through it. It’s a psychological and spiritual journey, which sounds pretty fancy but plays very directly.

How did the show originate?
LANDAU: It began with the book, which was the basis of the play. He loved doing the book and got the idea of using the spine of the book to tell his story in a live setting. He worked it up on his own. He was invited to the White House by Obama. I thought he’d do maybe seven or eight songs in an informal setting, but when we got there Bruce pulled out all these pieces of paper. He told me to sit in the audience and we’d talk about it afters. He’d obviously been working on it for a while – it was 80 per cent of the show we took to Broadway. Right from the beginning, this was composed and written, and wasn’t going to change. The only change was “Long Walk Home” was swapped for the slightly more tragic “The Ghost Of Tom Joad”. The stories are the stories and there’s a little room for embellishing, but they remain largely the same, the variation is the delivery.

Did he not get bored?
LANDAU: Bruce has an ability to dial into the moment, into what he is feeling right then. He experienced the content of the show in a very direct way, he’s immersed in it. There’s nothing routine about it for him, even though the format is very established. This particular ability gives every show an immediacy and urgency that the audience thrive on. We started with 40 shows. I thought we might end up doing around 100 but by the end, we’ll have done 236. Bruce was very determined to keep going. He loves doing the show. He has no other reason to do 236 of anything. It feels good to him. It’s emotionally draining but it’s very satisfying. I often see him after the show and he is without fail in a fantastic mood. Very cheerful and satisfied. It’s a big effort, a big experience, a big relief and when it’s over he feels he did something worthwhile that day.

Some of the songs are quite radically different.
Yes, and the variations are caused by the context of the play, the setting. Because he’s not planning those changes, they just seem natural. There’s all sorts of variations. In “Dancing In The Dark”, there’s improvisation on the vocal towards the end, in “Land Of Home And Glory” he’s improvising lines that touch on his love of soul. That’s shaped by the songs being where they are in the show. It’s all connected.

How did the show develop?
ZIMNY: The editor in me really admires the way he honed and perfected the show over time. I was watching how every detail in the show had grown, and we were waiting for his timing, his delivery, his rhythm, to be in the perfect place to be filmed. The exciting moment was when he sang “Long Time Coming” and it was very emotional. That was something you couldn’t see in the theatre unless you were standing next to him on the stage. When you see the eye tear up and the intensity of that performance, we captured something that wasn’t planned, it was the pure performance of the night. We knew  we could build the whole show  around that moment.

The film is just Bruce – no theatre, no audience, no reactions – can you explain the thinking behind that?
ZIMNY: The film starts with a close-up of Bruce and his opening line of dialogue. We didn’t want to go outside the theatre and do the traditional build-up. We knew we had a show that was over two hours long and we wanted to capture the intimacy of the theatre experience and the best way to do that was to focus on his eyes. The film relies on the drama and intensity of his eyes, the story and the connection he has with the audience. We wanted to step into the rhythm Bruce was delivering and not interrupt it.
LANDAU: We asked Bruce what the goal was. Bruce said it was to show the show as fully, deeply and completely as we can, for the audience that has seen it and for the audience that hadn’t. We didn’t want to reinterpret it, we wanted a straight focus on the man. His face tells the story and by getting as close as we do as often as we do, the audience starts to read the look in his eyes. That becomes the action. The face is so expressive and very satisfying to see him in close-up.

How many shows were recorded?
LANDAU: Two nights. These were friends-and-family shows, because the cameras were blocking certain positions, but he did exactly the same show. We’d allotted some time for retakes but didn’t use them. There’s not one change in the vocal, that is 100 per cent live. The performance was so strong, we could walk out of there with everything we had.

What can we expect for 2019?
LANDAU: If I make a prediction I get in trouble with the fans. So it’s a clean slate; we stop at Broadway on December 15, and while we have a few ideas, we have no firm plans for next year.