The new issue of Uncut is now on sale 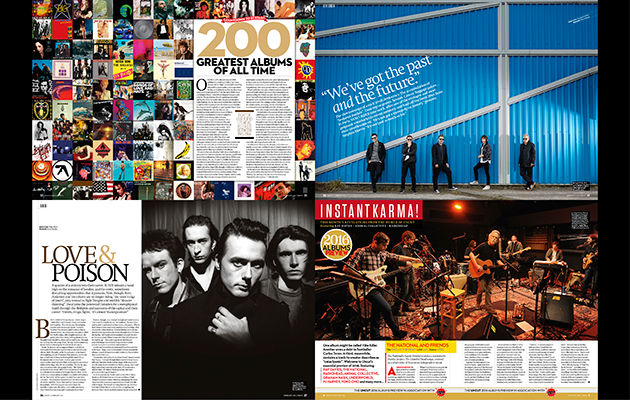 First up: Happy New Year! I hope you all had a great Christmas and New Year; and, critically, are managing to keep it together over these perilous first few days back after the break.

As you’re hopefully aware, the new edition of Uncut is now on sale. In case this news somehow got lost in the general post-Star Wars/pre-David Bowie album clamour, please indulge me while I do some gentle recapping of the issue.

Our cover story is our survey of the 200 Greatest Albums Of All Time: this has already opened up plenty of debate on our Facebook page and on Twitter. Of course, we’d love to know what you think about the list – so please drop us a line at uncut_feedback@timeinc.com.

For our own part, it’s an interesting experiment. Although it’s not reason enough, it occurred to us that we’ve never run a ‘greatest albums of all time’ list before – but as writers brought up on similar NME lists passim, and subsequently drip-fed various iterations on the theme in other media, it seemed a useful way to stimulate debate about not only the music we love and write about every month in Uncut but the manner in which our attitude to the past changes over time.

For what it’s worth, I voted for The Velvet Underground‘s Loaded as the Greatest Album Of All Time. That’s certainly been my opinion for a number of years now. But at earlier points in my life, I distinctly recall making an equally valid claim for Ziggy Stardust, and then later Disintegration by The Cure. The reasons why I alighted on those albums are now lost in my memory; and there will probably come a time when my tastes shift imperceptibly and another album other than Loaded, becomes – in my humble opinion – the Greatest Album Of All Time.

There’s also New Order, Suede, An Audience With John Cale, the Making Of Sun Ra‘s “Space Is The Place”, an Album By Album with Michael Rother and Barry Adamson takes us through My Life In Music. We review new albums by Lucinda Williams, Savages, Tindersticks and Ty Segall and reissues by The Long Ryders, Françoise Hardy and Them. In the front section, Ryley Walker and Danny Thompson hook up, Matmos shares the secrets of his washing machine and Ronnie Lane is remembered.

In Film, I’ve written about The Revenant, Trumbo, Spotlight and Bone Tomahawk, while in DVD, The Friends Of Eddie Coyle makes it on to DVD in the UK and a new Sarah Records doc is reviewed.

The issue is in shops now, of course; but you can also buy it digitally by clicking here.