Live footage of 'Same Kooks' from their London show too 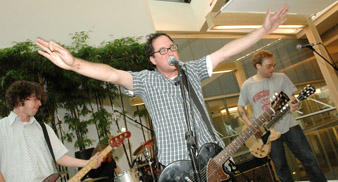 Here is part one of an exlusive interview with the Hold Steady, filmed when the night they dropped in to play the Uncut 10th birthday party, at the start of the month (July 2).

The band played a short but blistering set in the Uncut canteen on the 10th floor, before jetting off across town to play their own headline show at Shepherd’s Bush Empire.

The video interview with bandmembers Franz Nicoklay and Tak Kubler cuts to a live performance of ‘Same Kooks.’

The track from Hold Steady’s ‘Boys and Girls In America’ album was filmed at their Shepherd’s Bush show.