Laura Veirs:  “It’s our responsibility as artists to give hope…”

The singer-songwriter talks to Uncut ahead of the release of new album, The Lookout 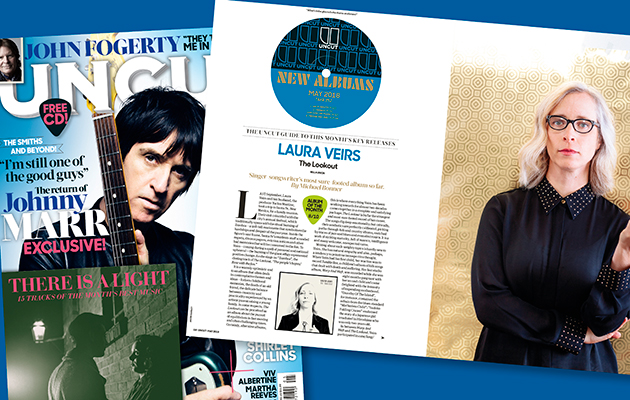 Laura Veirs latest album, The Lookout, arrives later next week. It’s excellent and you can pre-order copies by clicking here. In the meantime, here’s the full Q&A I did with Laura that accompanies my review of The Lookout in the current issue of Uncut (which you can buy here).

What did you learn  from your time in the case/lang/veirs project?
I learned a lot about co-writing. I’d never done it before. It’s weird to sit in a room with relative strangers and come up with soul-searching music. It was tough sometimes – fallow like any other creative endeavour – but when it worked it was amazing! I especially enjoyed witnessing Neko write brilliant lyrics on the spot. I also learned a lot about performing and “owning” the stage from KD. She’s a master of performance and makes it look easy!

When did you start work on this album?
After the case/lang/veirs touring was done. I wrote four days a week for about four hours per day for a year to come up with the songs for this album. I wrote 117 songs – sometimes 10 versions of the same lyrics but with different music – and my producer/husband helped me cut them down to the 14 that we recorded for the LP. Twelve made the cut.

How does a ‘normal’ day tend to pan out for you in the studio?
As we have two young kids, we work from 10–6 in the studio. My parents watched our kids for this album – they actually took them camping for five days, so on those days we worked longer hours. So it’s load in, play songs, do overdubs, work out who’s doing what, eat lunch, repeat and pack up and go home for dinner with the kids. Pretty boring stuff, really! It’s always a pleasure to hear how magical the music sounds as it emerges – that’s Tucker’s doing and the musicians’ doing.

There are recurring themes and images on the album – death, rebirth, the elements. How do you tie them all together? Do you start with a concept or does it all reveal itself in the edit?
I used to start albums with a theme in mind, but in recent years I’ve let the songs dictate over time what the themes are. In this case the songs revealed a lot about my feelings of vulnerability – in terms of being halfway through life and seeing loved ones die, in terms of raising young children in a screwed-up world and also my gratitude for people who I trust and love who are a solace for me in this dark political climate. I noticed “the lookout” coming up in the lyrics and then I started writing more songs with that theme in mind. A writer recently said the album is a “meditation on the precariousness of existence”, which seems about right to me.

“How can a child of the sun seem so cold” – from “Seven Falls” – feels like a critical line in the album: joy, fears, a change in perspective. Can you explain a little about the sentiment behind the line and the song?
It’s about how I can be cold-hearted even when I don’t mean to be – how I slip up and can be mean, to my husband, yelling at my kids, etc, even though I wish to be kind-hearted. I was raised in a sunny place, Colorado, in a happy family but I am still human: we all have a dark side, whether we like it or not. This song is lyrically the most revealing/vulnerable to me – who wants to admit that they can be cold-hearted? Not me! But that’s where the good stuff often is.Right now it’s my favourite song on the album.

What comes first: words or music?
Usually music. When I find good words I’m delighted and I try to use them however I can and will often try them out in different melodies and chord structures until I find the best fit. This is how I can write 10 versions of the same “song”.

What qualities do guests like Jim James or Sufjan bring to a project like this?
Tucker heard Sufjan’s voice on “Watch Fire” when I played him the demo and we were excited when Sufjan said yes. Sufjan of course brings cachet but he also brings his own version of powerful soulfulness. Jim brings a brilliant range of sweetness and chaos.

“Zozobra” seems a critical part of the album’s cycle: release and hope, an upbeat send-off. Tell us about the importance of the song to the album…
Thanks for noticing this! Yes, I wanted to end the album on a hopeful note. People need hope right now. Artists can give it; it’s our responsibly to give it. Things are going to get worse before they get better, but they will get better, especially if we look out for each other however we can.