Just back from the Uncut Stage, which has hosted some pretty remarkable performances so far today.

Just back from the Uncut Stage, which has hosted some pretty remarkable performances so far today. 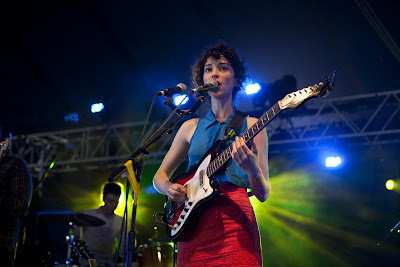 Opening the stage at midday was Wildbirds And Peacedrums, a Scandinavian boy-girl duo peddling an unusual, experimental take on the blues. Vocalist Mariam Wallentinis is blessed with the sort of gospel-tinged voice you wouldn’t feel terribly silly comparing to Amy Winehouse, say. It’s what the twosome do with it, though, that’s truly surprising. Sat behind the drums, Andreas Werliin whips up pounding, tribal rhythms which Wallentin uses as a bed for all manner of primal exhortations. “You see, I’m lost without your rhythm,” she pleads, kicking off her shoes and bounding, trance-like across the stage. It’s relatively short on tunes – although Wallentinis sometimes beats out simple melodies on steel drums – but really, though, it’s all about the raw, primal rhythms, building towards crescendos and staying there, right at the brink. 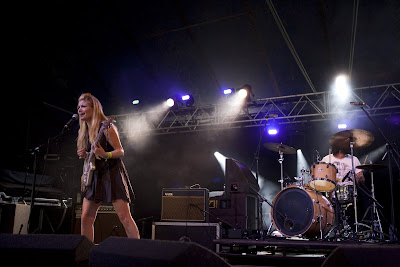 Following is Marnie Stern, and the continuing lack of commercial success granted to this New York singer/guitarist is baffling in the extreme. I mean, what’s not to like? Pretty blonde in a dangerously short dress, playing the sort of most excellent electric guitar that would have Bill And Ted tossing the mane and throwing the horns. Today, Marnie seems to have turned down some of the super-complex, finger-tapping excesses of her albums in favour of straighter hard-rockin’ tracks like “Transformer”, although it’s still a tricksy, often dissonant tangle that’s certainly ambitious in its musical and lyrical approach. Stern’s guileless charisma keeps this performance firmly on the map, though: whether chatting about vaginas, glugging beer and vodka, or trading flamboyant licks with her bassist, her performance is a joy to watch.

A great show from St Vincent, too. “My name’s St Vincent and I’m from Dallas, Texas and I’m very happy to be here,” she says, by way of introduction. “This song’s called “Laughing With A Mouth Of Blood”. Which says a lot about Annie Clark’s peculiar mix of choral pop and unusually dark subject matter. Here, the pop miniatures of Clark’s recent album Actor are worked up with eddying clarinets and blasts of saxophone – and they sound pretty comfortable in their new skin.

Right, that’s all for now – if you’re reading this from the site, I can recommend forthcoming sets from The XX on the Sunrise Stage at 6.45pm, Camera Obscura at 7.20pm, and of course, tonight’s Obelisk Stage headliner, Grace Jones. Catch you in a bit.