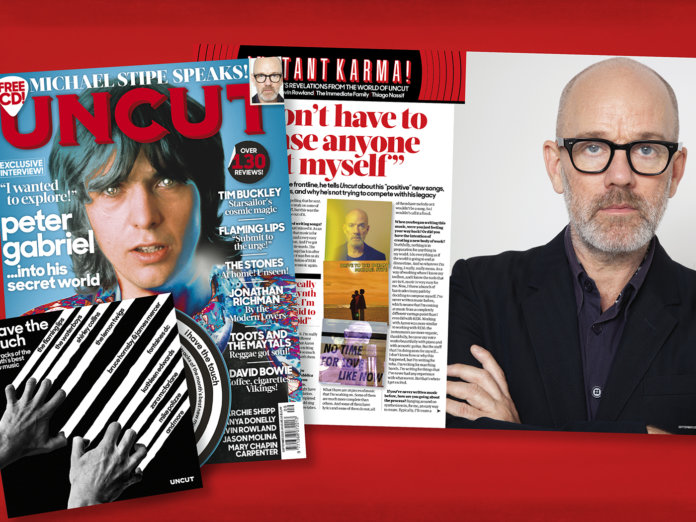 The new issue of Uncut – in shops now and available to order online by clicking here – features an exclusive interview with Michael Stipe. On the release of his new collaboration with The National’s Aaron Dessner as Big Red Machine, he discusses his “positive” new songs, writing for marching bands, and why he’s not trying to compete with his legacy.

“I don’t think it’s that I missed [writing songs],” says Stipe. “As an artist, I would say that music is for me a very obvious and a very easy entry into expression. And I’ve got this voice. And I write words. The music just kind of crept back in after a long break. I think it was five or six years from the dissolution of REM [in 2011] to working on music again. And, yeah, I’m enjoying it. I’m really enjoying working with different people and I’m thrilled that Aaron is one of those people. It’s exciting to admire someone’s work so much and then be able to write with them and be in the studio.

“I have 18 pieces of music that I’m working on. Some of them are much more complete than others. And some of them have lyrics and some of them do not; all of them have melody or it wouldn’t be a song… I’ve never written music before, which means that I’m coming at music from a completely different vantage point than I ever did with REM. Working with Aaron was more similar to working with REM: the instruments are more organic, thankfully, because my voice works beautifully with piano and with acoustic guitar. But the stuff that I’m doing more for myself… I don’t know how or why this happened, but I’m writing for tuba. I’m writing for marching bands. I’m writing for things that I’ve never had any experience with whatsoever. But that’s where I get excited.

“Typically, I’ll create a melody by singing over it then I’ll mimic that melody with a synth and develop it or not. I like really dumb synth sounds. So I’m not afraid to be stupid. I can do whatever the fuck I want, in essence. I’m at that point in my life where I don’t have to please anyone but myself. And that’s a high calling, because I have pretty good taste!”

You can read much more from Michael Stipe – as well as from Aaron Dessner – in the September 2020 issue of Uncut, out now with Peter Gabriel on the cover.