"Half of it was exquisite agony, the rest of it was an unbelievable thrill" 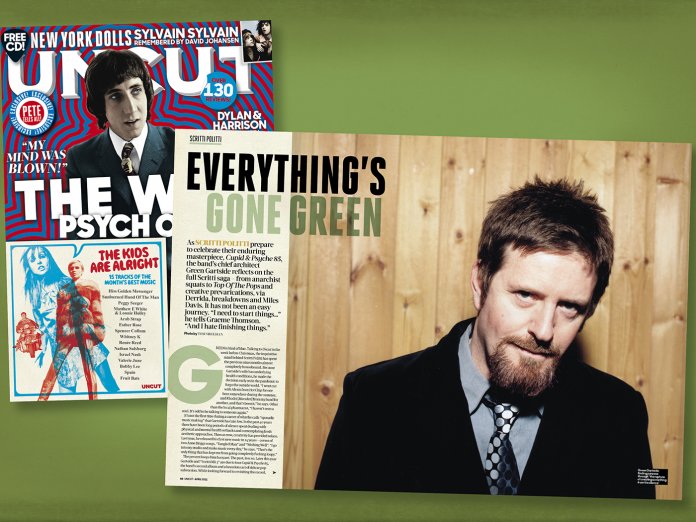 The current issue of Uncut – in shops now and available to buy online by clicking here – features a candid interview with Green Gartside of Scritti Politti as he reflects on the full Scritti saga, from anarchist squats to Top Of The Pops and creative prevarications, via Derrida, breakdowns and Miles Davis. In this extract, as Gartside gears up to tour the band’s brilliant and confounding album Cupid & Psyche 85 for the very first time, he looks back at its recording…

Working with David Gamson and Fred Maher, how did Cupid & Psyche 85 take shape?
David and I did a bit of work in London, and he said, “We need more time – why don’t you come to New York?” He lived with his parents, and was still attending Sarah Lawrence [Arts] College, so I stayed with him and his parents while we did some demos to take to Warner Brothers and Virgin. We got the money to make the album and got Arif Mardin involved, who in turn found all the incredible musicians. It became a New York based thing, but not exclusively. We’d come back to London to do some recording. Fred Maher was an old friend of David’s. What the three of us shared was a great love for things like Henry Cow and Robert Wyatt. They were knowledgeable about the British underground, and musically sophisticated. Fred’s dad was a writer about jazz. David’s father was an assistant to Leonard Bernstein. They were incredibly savvy. Their other great passion was pure pop music and burgeoning hip-hop and R&B. We were completely on the same page in terms of influences and enthusiasms.

You were working with Arif Mardin and A-list session players like Steve Ferrone. Did you feel in control of those sessions?
The inadequacies that had caused me to come unstuck on a few occasions were pretty heightened. Half of it was a kind of exquisite agony; the rest of it was an unbelievable thrill. Having not long come out of making scratchy guitar noises at the Electric Ballroom, to be in Atlantic Studios or the Power Station with musicians of that calibre was deeply unsettling. Arif was very good at helping me through that, but it took its toll. The nightlife in New York at the time was amazing. I could afford to live fairly comfortably, to put it mildly, in Manhattan, so there was a lot to enjoy. It was ridiculously profligate business.

Songs like “The Word Girl” and “Wood Beez” consciously deconstruct the vocabulary of pop. How successfully did those messages cut through?
Nowadays you can go on university courses to study critical theory and pop music, but there wasn’t a lot of that back then. I felt with Cupid & Psyche 85 there was a lot of talk about these ideas that did reach certain people and resulted in some interesting thinking. Not infrequently still, a junior professor will send me a book about some aspect of philosophy or culture and say how important whatever I’d done had been to them. I never did blend the right degree of inanity with the correctly sized dollop of critical thinking. Lyrically, I never did achieve that. It was beyond my skills at the time. But I tried.

How do you feel about revisiting the album later this year?
The band are really excited and I think it’s going to be a blast. We’re making plans already – we’ll do some preliminary rehearsals in June, they’re booked in. There’s pain in listening to all the records from the past, but I’ve discovered that in playing them there’s only pleasure. I feel much better disposed towards it. I’d have thought at one point those songs would have been too difficult to play live – it remains to be seen whether that’s the case!

You can read the full interview with Green Gartside in the April 2021 issue of Uncut, in shops now with Pete Townshend on the cover – or available to buy direct from us here.