An interview with William Eggleston

The legendary photographer embarks on a music career, aged 78... 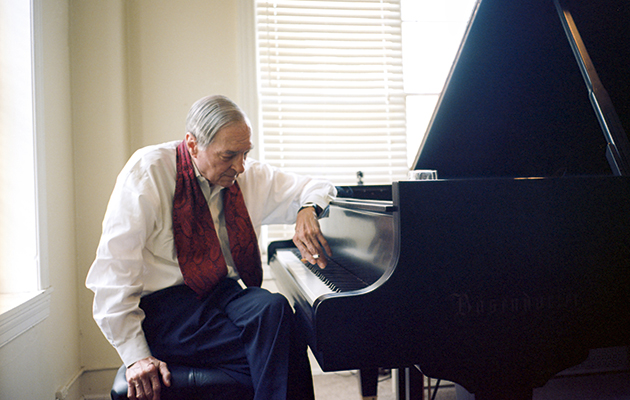 It is early morning in Memphis and already the photographer William Eggleston is planning his next project. “I’ll be in Paris very soon,” he explains. “I work with people at Cartier. Right now, I’m working on a book of all their commissions throughout the years, which would be a 10- or 15-year acquaintance between us. I’m very much looking forward to it. It’ll be a very fine book, I’m sure.”

This, it transpires, is a typical conversation with Eggleston. At 78, he has an international vision, his dealings in many instances taking place at the higher end of the artistic spectrum. When he speaks, his voice has a satisfyingly leathery creak. His sentences unfold impressively, with a courtesy that underscores a Southern upbringing.

At present, Eggleston is at home in his apartment in Memphis. “I grew up around 100 miles south of here, where my family had for a long time grown cotton,” he explains. “I married a Memphis girl. I had already spent a lot of time up here. When you’re from the country, this was a big town to go to.”

All this is a preamble to a discussion about Eggleston’s latest project – an unexpected career swerve in his eighth decade. The photographer has long been on the peripheries of music: he enjoyed a lifelong friendship with Big Star’s Alex Chilton and his work has been used by musicians as diverse as Primal Scream and Joanna Newsom. But this month, Eggleston releases his debut album, Musik. “I started playing the piano when I was four and never stopped,” he explains. “I still do it, at night. The disc consists of recordings I’d done on the Korg, with 88 keys, capable of a lot of different sounds. I don’t have any tapes. I only have floppy discs.”

Eggleston was born in 1939 and went on to establish himself as a pioneer of colour photography with a series of extraordinary, vital pictures of everyday life in the US South during the ’60s and ’70s. “I didn’t think that I was making a social statement,” he reflects. “I was interested in creating images of what I saw growing up. That’s how it started out. It still goes on.”

Among Eggleston’s friends were  a couple, a jazz musician Sidney Chilton and his wife Mary, an art dealer – along with their son Alex. “We knew each other for a long, long time and we always were good friends until he died,” he says. “We never really talked about music. Big Star’s music held little interest to me. I was more interested in classical music – so Bach, Mozart, Chopin.” Nevertheless, their connection eventually found its way onto Big Star’s records. Eggleston’s photo, ‘The Red Ceiling’ – taken at a TGI’s restaurant in Memphis – adorned Big Star’s Radio City album (“I don’t even have a copy of that LP cover,” he admits) while Eggleston played piano on the band’s cover of Nat King Cole’s “Nature Boy”. “I think I did a perfectly good job of it,” he notes. “It was not one of Alex’s best days for singing; he may not have even known the song, really. I knew it quite well from growing up.”

It wasn’t all Memphians, though. In New York, during the 1970s, Eggleston witnessed first-hand another celebrated photographer – Andy Warhol. “I met him through a young lady I was spending a lot of time with who was in a lot of his films, named Viva – who is still  very close. Andy was a quite distant person. I was not all that impressed.”

Although Eggleston later shot the likes of Dennis Hopper and Joe Strummer, he remains sanguine about his place in the counter-culture. “I was around – but I felt quite apart from it. I was a loner among people who had created a culture of their own. But I was doing the same thing, though separately.”

In the 1980s, Eggleston was commissioned by Priscilla Presley to photograph Graceland, leading to another remarkable cache of photographs that continue his thematic interest in the forgotten corners, empty spaces and abstracted details. “The place didn’t mean anything much to me,” he says. “It’s not architecturally interesting. I tried to do the best I could in quite a neutral way to depict it in photographs. Why neutral? There are a lot of things I looked at within the house – and outside it – that quite frequently I wanted to avoid. I didn’t want to make any of the images evoke either negative or positive feelings.”

Encouragingly, Eggleston’s work has continued to draw attention from musicians, including Green On Red, Silver Jews, Cat Power and Spoon. Why do musicians continue to use his work? “I think they have good taste,” he says.

Musik is released by Secretly Canadian