On life as a worker bee, gay rights, the Bible and the making of her new album, 'The Beekeeper' 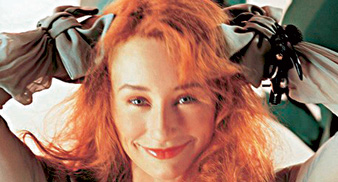 Counting down our 50 favourite LPs of the year
Read more

Our Top 30 new old releases of the year
Read more

UNCUT: Your new album is called The Beekeeper, how much of it is about making honey?

AMOS: There’s honey-making involved, but really it’s about this woman who visits the garden of life and decides to eat from the tree of knowledge. Once she does so, she experiences all kinds of emotions from passion to betrayal, to selfless love, to temptation, to seduction, to disappointment and bereavement. The songs capture different stages of her journey and explore her different feelings.

There seems to be a biblical theme running through the album from ‘Original Sinsuality’ to ‘Marys of The Sea.’

I’ve always incorporated religious characters into my music, but they’re particularly prevalent in The Beekeeper, because as I was researching it I started to think about how much attention is focused on religion and the need that people have to argue about their beliefs to the point of war. As I started to dissect the ideas and ideologies behind both parties, I found myself going back to the Bible and some of the stories contained within it.
‘Original Sinsuality’ for example, tells the parallel story of Genesis and suggests it’s not sin you find in the garden, it is original sinsuality.

America is such a land of extremes. On the one hand, you have this puritanical ideology that lots of people have adopted and on the other you have a huge porn industry that exploits everybody and makes lots of money.
The thing that’s missing from both is sensuality and I think that’s the sign of a damaged society. It’s not healthy for sex and sexuality to always be portrayed as dirty or depraved and what it takes to turn people on sometimes shocks me.
There are a lot of damaged women out there who can’t respond unless they take on another character because they haven’t been taught they can just be a worker bee. I’m a worker bee and I love being a worker bee.

Yeah. I know some artists prefer not to comment, but I’ve followed the US administration and I genuinely believe they’ve emotionally blackmailed and manipulated the American people. We’re living in a frightening time and I wish people would wake up and realise they’re surrendering their civil liberties.

I’ve thought about this a lot since I had my daughter and what I find really disturbing about this global war, is you don’t see any of the world leaders sending their children to be butchered. It’s always someone else’s children, someone else’s blood. In ‘Mother Revolution’ the woman realises she cannot fight the patriarchy in the way that they fight and she can’t just turn her back either. In order to be effective she has to come up with a new solution. And sometimes the best solution isn’t to throw a bomb at a balloon, it’s to pop the balloon with a kitty heel!

The Beekeeper is your eighth studio album. Are you past caring how successful your records are or do you secretly hope they’ll fly straight to the top of the Billboard charts?

It’s always a nice surprise if a record does well, but I’ve learn not to value things in terms of commercial success. Sometimes you make a record that taps into the masses and sells thousands of copies and sometimes you don’t. If you want to be a popular artist with every record in the charts then you need to be honest about that and make your records accordingly. You can’t get angry if ten years later you feel like you’ve sold out and disrespected your talent. Personally, I can take or leave success. The most important thing for me as a composer, is that each piece of work I create is one I’m proud of.

Would you say there’s an autobiographical element to everything you write?

Definitely. I write from what I observe and a result, all my songs are an expression of what I’ve experienced or thought or witnessed. Sometimes I write from my own perspective and sometimes I’m hidden in the songs so you might not know I’m even there. In real life I might have been the one that wasn’t so kind, but I’m singing it from the other person’s perspective because it makes it a stronger story.

Does every album you compose have an underlying theme?

The theme might not be as obvious to the listener as it is to me, but each album is usually about a bunch of different things – I like to educate and enlighten myself about the world and the people that live it in, so I usually begin each record by researching and immersing myself in my chosen subject. When I feel like I’ve got to a point of enlightenment, then I lock myself in my studio and start composing. Sometimes I start with a melody, sometimes I just play the piano until I get an idea. The only thing I’m really conscious of is trying to channel the music through my being.

You play both piano and Hammond organ on this album…

Yeah, my husband bought me a B3 Hammond organ for Christmas last year and I fell completely in love with it. It has a very different sound to other organs and I liked the idea of using it alongside the Bosendorfer piano because I wanted the music to represent the pollination that goes on in the garden. To me, the Hammond is a very funky, masculine instrument whilst the piano is more emotive and feminine. On The Beekeeper, they come together to form a perfect union.

The Beekeeper is released Monday 28 February on SonyBMG. Tori Amos will tour Europe and the UK in May.

Occasionally, in the years since his death, I’ve found myself idly speculating on what Leonard Cohen would have made...
Read more
Advertisement
DVD, Blu-ray and TV