Director Paul Schrader talks to Uncut about the bloody battle to bring his Exorcist prequel to the big screen. 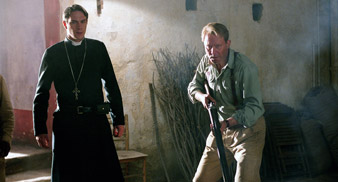 “I always thought there would be blood on the floor, I just didn’t think it would all be mine…”

In March this year at the Brussels International Festival of Fantasy Film, a movie no one expected would ever see the dark of theatre was finally screened for the public – Exorcist: The Prequel, Paul Schrader’s version of horror-franchise prequel, which was quashed by its studio after it was nearly finished three years ago.

By now it’s the stuff of Hollywood legend – how producers Morgan Creek hired Taxi Driver and Raging Bull screenwriter Schrader to direct the story of Father Merrin’s early battle with the devil, then panicked when he handed in a film soaked in angst and light on scares. Subsequently, Schrader’s cut was abandoned in favour of a much more conventional version directed by Renny Harlin, which went on to garner vicious pans from critics if moderate box-office success.

The film is scheduled now to get a theatrical release in select European territories and in the US in May.

Here, Schrader talks to Uncut about his long struggle to get the movie to the big screen…

Uncut: Did you revisit the first Exorcist film for inspiration?
Schrader: Yes, but we didn’t look at it that closely. All we had to do with this prequel is make sure Merrin lives and meets the Devil.

Did you experience a feeling of Schaudenfreud when the Harlin version bombed?
It was mostly Freud rather Schaudenfreud because what I was most worried about was that it would be sort of good, so [as I watched it] the worse it got, the better I felt. By the end of it I was thinking maybe there’s a chance mine will come back. And to be honest, I don’t think Renny’s film really bombed: it did $40 domestic and about $30 internationally.

When they asked you to make the film did you have any inkling of the problems ahead?
I should have! Every director has an ego the size of this building and still thinks, ‘I can do it.’ I always thought there would be blood on the floor, I just didn’t think it would all be mine. It’s like you have a sick child in the other room, you’re always hoping. DVD and the internet has changed the face of exhibition and marketing, so I could begin my campaign to get this version released by saying over and over, ‘There’s money in the DVD. Don’t forget there’s money in the DVD.’ Morgan Creek provided a bare bones budget to complete the film. The biggest problem was that there was no score. We used remixed version of Trevor Raban score, but I still didn’t have a theme so Angelo Badlamenti who I’d done four films with, wrote me a theme and orchestrated it, and I bought him a Rolex on eBay in deep gratitude. I also ended up getting music from the band Dog Fashion Disco, whom my son introduced me to. I paid them in meals.

You’re being awfully candid now publicly about what happened. Didn’t you sign some kind of non-disparagement agreement with Morgan Creek?
Yes, but I think the dispassionate recalling of the facts speaks for itself. Nobody wants to hear a whiny, vindictive overpaid director. Because the future of the film wasn’t in the hands of the same people who mistreated me, or treated me in a certain way, if I had ever succumbed to the temptation to vent my spleen I would have lost any opportunity of getting the film screened. That might have offered some temporary satisfaction but nothing like the kind of satisfaction I feel today. We learned to fight another day and to have some kind of ironic distance otherwise it’s just a life of grinding pain in this business, so if you can’t step back and see it all with a shrug you won’t last long.