Tells us why he believes America hasn’t given Alexander a fair chance and it’ll stand the test of time. 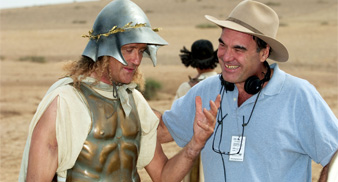 So Oliver Stone’s epic Alexander has tanked in the States and arguably suffered more critical flak than any major film since Heaven’s Gate. That hasn’t stopped the great man coming out fighting. Calm but intensely defensive at London’s Dorchester Hotel, flanked and supported by stars Colin Farrell, Angelina Jolie and Val Kilmer, he tells us why he believes America hasn’t given the movie a fair chance and it’ll stand the test of time.

UNCUT: Did you in any way anticipate the adverse reaction this film’s received?
STONE: Not really, I operate on my passion, I move forward on that. Sometimes I’m naïve, I don’t think about consequences. I didn’t regarding the JFK murder, and I was very surprised by the reaction then because it’d been out of the news for many years, but it suddenly became a tsunami. I couldn’t see it coming. I thought Alexander would be a “safe” subject because it’s an ancient one, but I was taken aback by the fierceness of the controversy, given that this is a character we really don’t know that much about factually. I work on courage, or blindness – you be the judge.

This was your dream, your “Great Epic“. How personally crushed are you by the criticism?
It’s been a long process. A thousand people put their heart into this and created something that will last, in many forms. You take one genre at a time: I’ve tried to do political, war, a finance movie, a sports movie. This you could say is my costume epic. Every film student has those dreams in their mind. I’m very happy because I was able to choose the hero that I most admire for it, and I’m proud of the result. Colin’s work will be appreciated more through time. Angelina gave an extraordinary performance and Val was not properly watched, not listened to.

The reaction to the film in the States has been quite extraordinary…
This is another world to what America knows. The film is pre-Christian, the morals are different. Certainly the sexuality is a large issue in America right now. Having come from 20 foreign countries in the last two months I can tell you it was not an issue in those countries. In America there’s a raging fundamentalism. From day one, in spite of reviews – because they don’t read reviews in the south! – the Bible-belt people did not show up, because there was one phrase all over the media (and in Natural Born Killers I called the media the “man-made weather”, if you remember). It was the phrase “Alexander the Gay”. That was everywhere to be heard, and as a result you can bet your ass that Americans aren’t going to see a military leader who has got something “wrong” with him, in their head. General Schwarzkopf is not gay, Tommy Franks is not gay. At least not publicly!
We took quite a beating in those states; there was just no audience to show up. Also, Americans don’t study ancient history the way Europeans and Asians do. They’re not as familiar with Alexander. But this is just one setback – a movie is a mountain and it goes on and on through time. That’s the beauty of it.

Would you do anything differently now?
There will be other versions of it, probably. There’s different ways to make the mountain. How to edit it, we have choices still. We can go in several directions without altering its fundamental soul. I think every movie, painting, book can work in different ways. The bond between Hephaistion and Alexander that’s so important can be suggested in various ways, and that’s the art of film making. If we’re skilful, then it’s not a retreat, it’s an exploration. It’s “how do we tell this great story in ways that a 10 year old can understand, in ways that an uneducated person can understand?”. I don’t mean to be condescending – I’m really challenged by it and will continue to work on the DVD forms as months go by, maybe years. It could perhaps have been a two-part movie. Movies are going towards home viewing, but they’ll need bigger screens. Anyway this could work as a theatrical version for everybody – it’s up to us to communicate. And the movie in its present form will communicate with some people.

What originally drew you to Alexander The Great?
Through the years, he was my hero. I read Robin Lane Fox’s book in the 1980s and began to admire and understand him more. He’s perhaps the most unique individual in history… more things happened to him of a strange, extraordinary nature than any other human being that I know of. He was involved in more events and battles than dozens of men. He’s a great dramatic figure.
The story’s concept is that you destroy the dreamer, you kill what you love. Alexander’s the great instigator, the mover-shaker of the world. Ptolemy is a celebrated man, but his memory will never be that of Alexander, and he knows it, and knows that they cannot live with the dreamer…