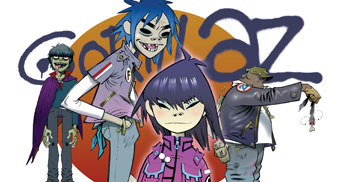 “Every great band is destroyed by their success: cartoon bands are no exception.” Discuss…

Noodle: When many great bands start off they are uniquely oblivious to what makes them special, what makes that exceptional. When they become successful these reasons are pointed out to them. Their magic is analysed and explained to them by their fans, the press or the people surround them. Therefore it forces a change in them. Either the band
react against it, or try to imitate the elements that make them successful, or other people expect a change. Even the choice to ignore these explanations is a decision. It usually affects that chemistry of a band. It can never remain the same as that first initial unconscious period. Every great band will face destruction or must destroy themselves in order to..start again. Cartoon bands are no exception.

Murdoc: The trouble with great bands is they lose their edge, y’know? The get distracted, or they start writing. ballads, or they mellow out. You know what I’m talking about anyway. As soon as bands become big they invariably need to be brought down. They get complacent. However, cartoon bands are the exception.

Russel: Yeah that’s the difference. You don’t want a cartoon band to become a caricature of themselves.

2D: That would just be weird.

Murdoc: Bands just seem to screw it up at some stage for some reason. If
they don’t, well that’s just equally dull.


Any truth in the rumours that Murdoc wants to kick 2D’s head in for being such an irritatingly good-natured pretty boy?

Murdoc; Hey, I’d want to kick his head in even if he was ugly. You can’t blame it all on good looks.

Was Danger Mouse chosen to produce because of his skills or his name?

Russel: We would never be so flippant with our music as to choose a producer for any other reason than a mutual love and respect for music, and an incredible ability to execute the vision they had for the album.

Murdoc: Yeah. The name Dangermouse was just a bonus.

2D: So was the fact that he turned up with an eyepatch and a mate called Penfold.

Noodle: I was impressed with the work he had done on his own ‘Grey Album’ which I had downloaded from the Internet. It took a while to convince him to work with Gorillaz, but the album took a leap into the incredible when Mr. Mouse arrived. This would be around June 2004. Dangermouse and myself immediately began an intricate pre-production session.

Murdoc: This mainly involved playing table tennis and listening to a load of old electro records.

Noodle: His instinct and insight into music is very intuitive. He will pull out the necessary elements of a track and disguard the rest. In that way the music has an athletic, direct economy whilst still remaining full and rich. I fully expect Dangermouse to produce an impressive run of excellent albums over the next 10 years.

Murdoc: Pass us a biscuit Noodle. I’m getting a bit peckish.


How on earth did Dennis Hopper get involved in this madness?

Murdoc: Oh yeah. Right. Blame it on us. Like Dennis Hopper had spent his entire life in perfectly normal and sane surroundings until he got dragged into the big old nasty madness of the Gorillaz world. Christ! Why don’t you find some other scapegoat, Huh?

Russel: Noodle ran into him at some award show and it turns out he knew some Gorillaz tracks already. We told him what we were working on and then took it from there. He’s always been a symbol for a certain type of expression and free speech that suited the track we were working on. So he seemed a relevant choice for Gorillaz.

Murdoc: He’s always crashed his bike right into the palace of wisdom so we thought, ‘wait a sec I’ll just get my helmet.’

Noodle: The track he narrated was a serious tale or a nation of innocents whose happiness was destroyed by people infiltrating them, and trying to overtake them. As they had never seen aggression or this type of behavior before, they were unprepared. It awoke something in their society which destroyed them and their attackers. This story is read by Dennis Hopper on the album, and because of his history he seemed the right person to deliver it.

2D: Hmmm. And he was great in Speed as well.