In an interview in the current issue of Uncut with Willy Vlautin, the singer-songwriter with Richmond Fontaine, discusses his flourishing second career as an author. 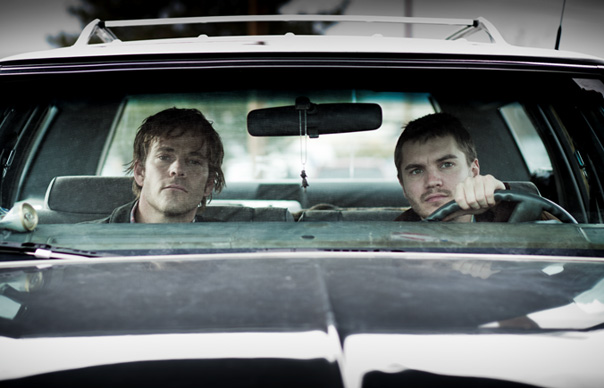 In an interview in the current issue of Uncut with Willy Vlautin, the singer-songwriter with Richmond Fontaine, discusses his flourishing second career as an author.

“A lot of the time when I’m writing, I’m trying to lay things to rest,” he explains, He specifically cites the autobiographical elements of his first novel, The Motel Life, which is set in Reno, Nevada, where Vlautin was raised, and flags up the correlation between himself and the book’s narrator, Frank Flannigan, an aspiring writer who inhabits the city’s motels and dive bars with his brother, Jerry Lee. “It’s hard to be a stand-up guy when you’ve just been getting drunk paycheque to paycheque,” Vlautin says. “I lived like Frank until my mid-thirties.”

This wintry adaptation of Vlautin’s novel finds Emile Hirsch cast as Frank and Stephen Dorff as Jerry Lee, and comes shot through with the elegiac qualities you’d associate with an outlaw ballad. Orphaned as children, the Flannigan brothers have effectively been living on the margins for most of their lives: a hopeless, downbeat cycle from which Frank and Jerry Lee retreat through their own stories and illustrations. Their predicament is exacerbated by the fact Jerry has a prosthetic leg after falling from a train. The situation finally becomes untenable for the brothers when they become involved in a fatal road accident.

First published in 2006, The Motel Life has taken a number of turns before it finally reaches UK cinemas. The book was first optioned by Guillermo Arriaga, the screenwriter of 21 Grams and Amores Perros, before being picked up by Alan and Gabe Polsky. The Polsky brothers had previously produced Werner Herzog’s Bad Lieutenant: Port Of Call: New Orleans, and are here making their debut as directors. Following its premier in November 2012 at the Rome Film Festival – where it picked up three awards including Best Film, it subsequently played at a handful of American film festivals.

The Motel Life deals in a pretty familiar array of themes – familial love, redemption, survival in desperate circumstances – and it conspicuously shares a sensibility with films like My Private Idaho and Drugstore Cowboy. But what’s perhaps most intriguing here is the absence of an adversary for the Flannigans. Considering their desperate environment, you could be forgiven for thinking they’d find themselves pursued by one of the usual bad guys you’d find in these kind of movies – hustlers, maybe, loan sharks, an aggrieved love rival or simply some guys they crossed one night in a bar. In fact, for all the Flannigans’ increasingly diminished luck, the Polskys have crafted a film that is surprisingly warm hearted. Far from being the kind of bickering, dysfunctional pair you might otherwise expect, the Flannigans are held together by a tight bond of brotherly affection. Hirsch and Dorff do good work as the Flannigans – boys essentially dealt a rum hand by fate and struggling as best they can to deal with it. A sub plot concerning Hirsch’s tentative attempts to reconnect with his former girlfriend – an understated turn from Dakota Fanning – is handled without sentiment. Kris Kristofferson cameos as the well-meaning surrogate father figure for the brothers. The soundtrack confirms the film’s Americana credentials: Calexico, Dylan and Cash and – of course – Richmond Fontaine.

THE MOTEL LIFE OPENS IN THE UK ON APRIL 4