Stoker arrives with some heavy expectations. It is the English language debut of South Korean filmmaker Park Chan-wook, the architect of the nerve-shredding Oldboy. 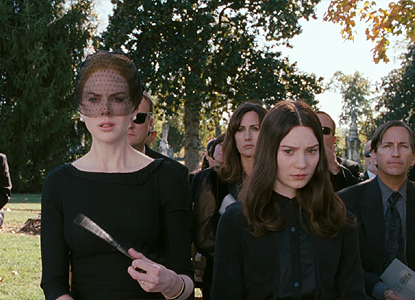 Stoker arrives with some heavy expectations. It is the English language debut of South Korean filmmaker Park Chan-wook, the architect of the nerve-shredding Oldboy.

It stars Nicole Kidman, playing the kind of cold, neurotic matriarch reminiscent of her performance in The Others; and – ladies! – it’s written by Prison Break’s Wentworth Miller.

As the title suggests, Stoker has its roots in Gothic horror, though Hitchcock’s Shadow Of A Doubt also seems an appropriate reference. After India’s father dies, her uncle Charlie moves in with her and her unstable mother, Evelyn. Naturally, Charlie’s motives remain mysterious. Evelyn, it seems, is not on the best of terms with her daughter. “You know I’ve often wondered why it is we had children,” she tells India. “The conclusion I’ve come to is that we want someone to get it right this time. But not me. Personally speaking I can’t wait to watch life tear you apart.”

As you’d expect from Park Chan-wook, something nasty looks set to happen in a phone box, there are some shears, something in the freezer cabinet in the cellar and one character gets stabbed through the hand with a pencil.

There is a suggestion Stoker is a vampire film – the allusions to Bram Stoker aside, Charlie (Matthew Goode) tells Evelyn (Kidman) that India (Mia Wasikowska) is “of age”. “Of age for what?” “You have no idea.” Personally, I hope turns out not to be the case. There are the makings here of a fine, stylish psychological thriller – resolving it with a vampire reveal seems lazy. There’s a lot bubbling away here.

Anyway, here’s the trailer. Hope you enjoy it.