It's a satisfyingly busy time for music films at the moment. The excellent Nick Cave documentary, 20,000 Days On Earth, is upon us; following swiftly in its wake are biopics of James Brown and Jimi Hendrix. 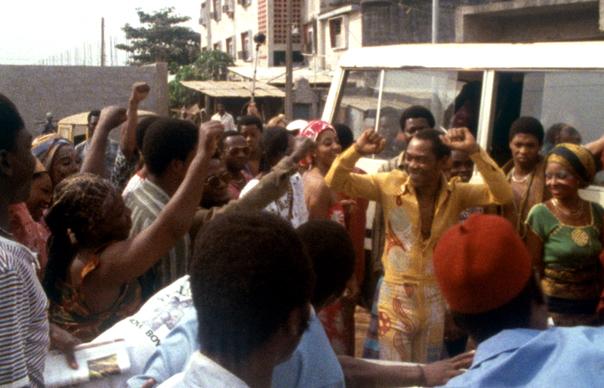 It’s a satisfyingly busy time for music films at the moment. The excellent Nick Cave documentary, 20,000 Days On Earth, is upon us; following swiftly in its wake are biopics of James Brown and Jimi Hendrix.

Meanwhile, the Toronto International Film Festival schedule has revealed no less than a Director’s Cut of Neil Young’s Human Highway, a Brian Wilson biopic and Roger Waters’ The Wall tour film. Among today’s new releases at the cinema is God Help The Girl, written and directed by Belle & Sebastian’s Stuart Murdoch; I wrote about it here. But let’s have a look, for now, at Finding Fela.

Seventeen years on his death, Fela Kuti remains a man of many, thorny contradictions. The son of Nigerian elite, he was an outspoken opponent of his home country’s oppressive government; a flamboyant musician, he was the pioneering forefather of Afrobeat. Yet he also a polygamist with over 25 wives who denied his HIV status right up until his death. A Western-educated thinker who travelled in the company of a spiritual advisor. Recently, his life and times have been turned into a high-profile Broadway musical, produced by no less than Will Smith and Jay-Z.

Trying to corral such a zesty, eventful life into a documentary form was never going to be an easy task for director Alex Gibney. Arguably, there’s enough here to fill several reivetting biographies, let alone this film’s two hour running time. But Gibney slips up. His decision to use the Broadway show as a way in to the story seems on the surface a potentially sensible idea. However, the film ends up, quite literally, with too many Felas. There is – most interestingly – the real Fela Kuti, but we are increasingly distracted from his tale by the presence of Sahr Ngaujah, the actor who plays Fela in the musical. Gibney cuts between archival footage of Fela along with fresh interviews with collaborators and family members; but alas also insists on returning to the Broadway musical. Is this a biographical documentary, or a meta-account that tries to explores the subject’s life through the work going on in another medium? Neither track goes deep enough to get a satisfying result.

Gibney adopts a literal-minded approach to the biographical aspects of the film. The best material is the archive footage of Fela live, though frustratingly Gibney only lets us briefly glimpse these vibrant, politically charged songs, many of which lasted 20 minutes or more. Among the talking heads are Fela’s former manager Rikki Stein, wife Sandra Izsadore and children Femi, Seun and Yeni, bandmates Tony Allen and Dele Sosimi as well as former New York Times’ West Africa correspondent John Darnton. Incidentally, Darnton is arguably the best of the bunch; a Pulitzer Prize winning journalist, he and a robust account of life in Fela’s semi-autonomous rebel compound, the Kalakuta Republic. Elsewhere, Bill R Jones – director of the Broadway musical –articulately attempts to reconcile the opposition aspects of Fela’s character. “Maybe that’s why I don’t like about musical theatre,” he says at one point. “Because it feels like everything is so cursory. Now we put this, now we put this, so we can get this.” Very much like this film, in the end.

Finding Fela opens in the UK on September 5