Elephant Micah: “Louder Than Thou”

Over the past year or two, MC Taylor of “Hiss Golden Messenger has become not just one of my favourite American contemporary songwriters, but also a great source of musical recommendations; most recently, of course, with his terrific “Wah-Wah Cowboys” mixtape. 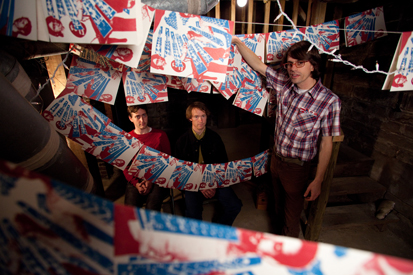 Over the past year or two, MC Taylor of “Hiss Golden Messenger has become not just one of my favourite American contemporary songwriters, but also a great source of musical recommendations; most recently, of course, with his terrific “Wah-Wah Cowboys” mixtape.

At the back end of last year, Taylor hooked me up with the new album by a friend of his, Joe O’Connell, who tends to record using the name Elephant Micah. “I met Joe sometime in the late ‘90s in Louisville,” Taylor wrote. “He was considerably younger than me at the time – I think he was maybe 17 when I met him – but it was already clear he was a formidable songwriter, and he’s gotten seriously deep since then. The last couple Elephant Micah records have all made my personal/mental year-end lists, and this one won’t be any exception. There is definitely a Richard & Linda Thompson vibe to this, and maybe even a John Martyn ‘Inside Out’ thing going on here, though I wouldn’t be surprised if Joe had never heard either of those.”

Since then, Elephant Micah’s “Louder Than Thou” has been a quiet pleasure, albeit one I keep forgetting to blog about. A looming release date at the end of January, however, has served to focus my mind about a record described in Product Of Palmyra label info as one in which, “Elephant Micah secures its place alongside other masters of post-roots mood music such as Califone and Sun Kil Moon.”

I can relate to that, and can throw in a reference to PG Six (especially on “If I Were A Surfer”), too. The other elephant in the room, though, especially relevant to a former resident of Louisville, Kentucky (O’Connell has subsequently relocated to Bloomington, Indiana) is a distinct kinship with Will Oldham: O’Connell’s vocals similarly sound both frail, plaintive and diffident at the same time.

He’s a comparably talented traditional songwriter, at least on the evidence of “Louder Than Thou” (I’m yet to dig deeper; if anyone can steer me, I’d appreciate it). O’Connell, though, seems to relish deconstructing his songs even as he sings them, so that while his vocal melodies stay more or less true, there’s a sense, on songs like the faintly jazz-tinged “Won These Wings” (where the John Martyn comparison seems particularly apposite) and the standout “Rooster On The Loose”, that the ground is moving beneath him, as the soft drum patter finds an idiosyncratic path that’s closer to improv than rote timekeeping.

A lot of the playing on “Louder Than Thou” rolls like this: loose, intuitive, unafraid to leave space and take chances when there are plenty of safer and more orthodox options. The small miracle is that these musical digressions never undermine the basic strengths of the songs, nor impinge on a warm, engrossing and, to be honest, pretty mellow mood.

A stealthy album, which rewards your patience, I think. But check out “If I Were A Surfer” at http://www.elephantmicah.com/ and tell me what you think.