Far out! The consciousness-expanding music of a jazz legend turned religious guru. 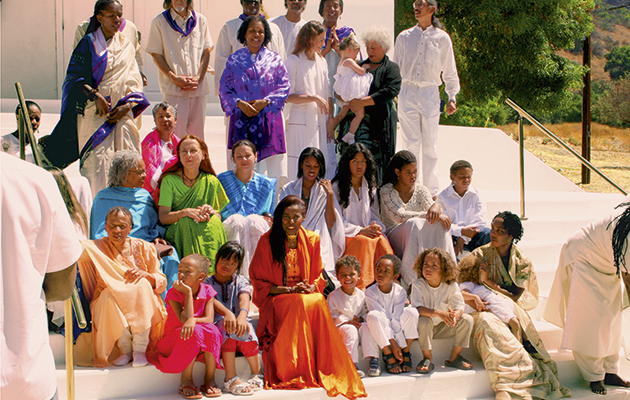 Large studio complexes can often contain multitudes, but rarely can there have been stranger neighbours than the occupants of Rumbo, in Los Angeles, in 1987. In Studio A, a local hair metal band were reaching some kind of apotheosis of rock decadence. In Studio B, the bright-eyed devotees of a local ashram would turn up each day to make delirious music, chanting prayers to the Hindu gods over transporting synths. The product of Studio A, Guns N’Roses’ Appetite For Destruction, would sell 30 million copies and become one of the biggest-selling albums of all time. The product of Studio B, Alice Coltrane’s Divine Songs, would be sold only as a cassette through a disparate network of New Age and health food stores.

What Divine Songs lacked in commercial impact, of course, it more than compensated for in karmic resonance. It represented the high point of the second phase of Alice Coltrane’s remarkable career, and – along with the three other ashram tapes she recorded in the ‘80s and ‘90s – has become a touchstone for a generation of crate-diggers. A generation often drawn to the idea of a transcendent experience offered by spiritual music, but not necessarily to the actual faith that underpins it.

Alice Coltrane, a preternaturally gifted jazz pianist, had been exploring eastern religions since the days of her marriage to John Coltrane, from when the couple began meditating together. After his death in 1967, though, her solo career explicitly embraced an expanding faith. She learned how to play the harp, incorporated Indian instruments and drones into her music, collaborated with fellow mystics like Pharoah Sanders, and made a series of albums, like World Galaxy and Universal Consciousness, that imbued jazz with a questing, devotional imperative.

By the early ‘80s, Coltrane had changed her name to Turiyasangitananda and had become a Swamini – spiritual leader – in the Vedic religion. She built her own ashram near Malibu, started a weekly programme on local TV called Eternity’s Pillar, and released books and cassettes on her own Avatar imprint. These four tapes have never been afforded a traditional release, traded instead as bootlegs and crackly illegal downloads, until now, with this first compilation in a projected Luaka Bop series entitled World Spirituality Classics.

From the start, and “Om Rama”, listeners expecting an update of Coltrane’s cosmic jazz will be in for a shock: pretty much the only holdover from her classic late ‘60s and early ‘70s sides is a surfeit of bells, tambourines and shakers. Where once there was a piano or harp, Coltrane instead favours an Oberheim OB8 analogue synth, whose default setting appears to be Celestial Whoosh. A collective of singers – as many as 26 at some sessions – are holding something akin to a Hare Krishna disco. After four minutes, though, the synths escalate to siren calls, the pace drops, and John Panduranga Henderson (a onetime singer in Ray Charles’ band) steps forward to lead the choir in a Sanskrit chant now delivered with the euphoric extemporisations of gospel. It’s a bizarre fusion, but one that still has great potency to secular ears: a collection of rapturous musical signifiers configured with melodic richness and energy. It confirms how appealing the otherworldly can be, even when you’re convinced that other world doesn’t exist.

As the mention of Ecstatic Music in the title suggests, it’s a compilation which favours the ravier, jauntier side of Coltrane’s ashram music. Nothing is selected from Turiya Sings (1982), the first and by some distance the most beatific of the four original cassettes (hopefully Luaka Bop will eventually release all of them, in their entirety). It is on the more meditative tracks, though, that Coltrane herself comes to the fore. “Om Shanti” is straightforwardly gorgeous, with Coltrane’s strong and mellow voice isolated over organ tones before she’s overwhelmed by the soulful fervour of her followers. Occasionally, too, in these serene moments you can detect further echoes of her old music: the tamboura drone and tablas that run through “Rama Rama”; “Journey To Satchidananda”, a sombre extrapolation of one of her formative jazz classics from 1969. The symmetry is satisfying, Coltrane coming to the end of her musical trip near where she had begun her solo career, her faith steadfast while that of many other esoteric adventurers of the late ‘60s turned out to be transient.

There would be one return to jazz before she died in 2007, a set called Translinear Light (2004) where Coltrane played piano and organ in the company of Charlie Haden, Jack DeJohnette and her sons Ravi and Oran on saxophones. For a final taste of her harp playing, though, look no further than “Er Ra”, taken – as is so much of The Ecstatic Music Of Alice Coltrane Turiyasangitananda – from 1987’s Divine Songs. While Ecstatic Music is predominantly delivered in Sanskrit, “Er Ra” is sung in a form of Ancient Egyptian, gracefully incanted over silvery flurries of harp. The crowds of believers have dispersed, the clatter of ritual long gone, and the meaning is, at best, obscure. But still, the beauty of Coltrane’s work, and the way she could transform a personal system of belief into the highest accessible art, is striking. A sceptic might be able to unpick religious faith, but perhaps understanding what makes a song into an epiphany is a harder, more mystical challenge than we often give it credit for.