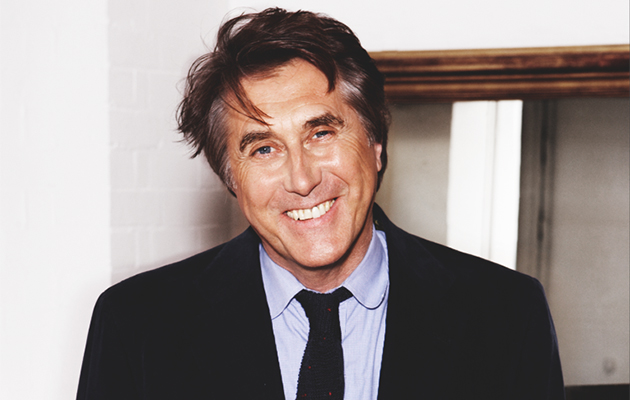 Olympia
Virgin/Astralwerks, 2010
The first collection of Ferry’s own songs since 2002’s Frantic, Olympia featured Kate Moss on the cover and a huge number of guest guitarists…

My songs go through a lot of stages, if I get fed up with how one sounds I just take it off in a different direction. “You Can Dance” was rockabilly originally. Sometimes somebody will play something and you go, ‘Ah’, it shows you another way the song can go. Songs are very important to me, having a good melody. Melody is what I’m best at. Do I rewrite my lyrics? Sometimes I’ll change the odd word, but by the time I bring it in to sing, I’ll have it more or less what I want it to be. Sometimes it takes forever, and if it doesn’t seem like the right lyric is coming, then I’ll just wait and go back to it the following year. I got in contact with Jonny Greenwood to see if he wanted to play – I thought he was a very good player, very experimental, lots of different sounds, musically very adept, the real deal. Johnny Marr, obviously, is another great English guitar player. I worked with him first of all at Air Studios, on a couple of things, “The Right Stuff” on Bête Noire. I met him because John Porter produced The Smiths on their first LP. We wrote a song together on Avonmore, and he’s terrific, he’s got better and better. Very versatile. He’s a great fan of Nile Rodgers, too, so it’s funny having them on the same tracks.

Avonmore
BMG, 2014
After 2012’s curio, The Jazz Age, Bryan reacts with his most uptempo set of songs in decades…

The Jazz Age didn’t really influence this, other than that I wanted to make a record very different from it. It’s nice veering from one direction to the other with records that follow each other. A lot of care goes into the making, especially now, as you’re thinking, ‘How many more records will I make?’ So you don’t want to put it out unless you think it achieves something. It’s nice to think you’re getting better at things. The more uptempo feel here is down to the fact I’d been doing so much live work the past few years, and festivals and stuff, where you’re conscious of everyone playing very fast songs. I felt I needed more fast songs in my repertoire, that’s for sure. Avonmore was going to be all original, but I had a couple of covers I thought made it a bit more expansive. “Send In The Clowns” is such a classic showbusiness song, and I like the strings on it that I did with Colin Good. “Johnny & Mary” had such a different sound to the others, too. I did that with Todd Terje, who’s very talented and it added a new dimension to the record. There’s still a lot of comping involved. You want to get that person to do what they do best – with Nile, it’s beautiful rhythm parts. On the odd occasion he bursts into a solo, we say, ‘No!’, or let him go for a bit ’til he blows himself out… All these people I work with are clever, they’re not show-offs. It’s a treat to work with people of that quality or skill.

You can pick up Uncut’s new Ultimate Genre Guide on Glam here!