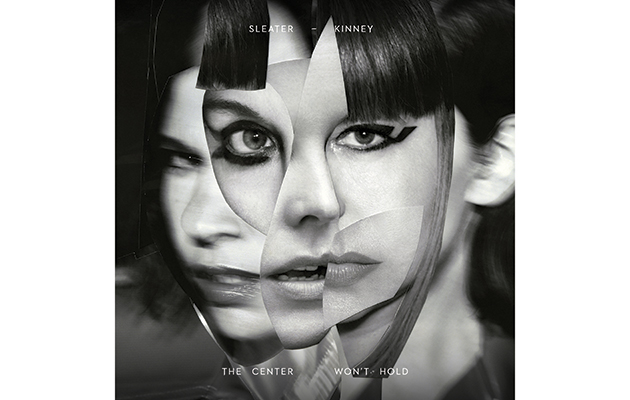 Something of a survivalist drive has sustained Sleater-Kinney over their 25 years as a band. Together, Corin Tucker, Carrie Brownstein and Janet Weiss have braved the hardships of their early days in Olympia, Washington, as well as the inevitable stresses of growing fame in the 2000s. They even weathered a decade apart, returning triumphantly in 2015 with No Cities To Love, which showed that, despite approaching an age at which it’s often judged unseemly for women to still be making rock music and with multiple successful parallel careers, Sleater-Kinney had lost none of their focus, nor any of their righteous, feminist post-punk energy.

The Center Won’t Hold, however, is far from the comfortable victory lap they might otherwise deserve. “The band is heading in a new direction,” wrote drummer Janet Weiss on Twitter at the start of July, “and it is time for me to move on.” “We are saddened by Janet’s decision to leave Sleater-Kinney,” countered her former bandmates. “It has been an incredible privilege to work with such a talented musician and drummer over the course of so many albums, including The Center Won’t Hold.” So just what is it about the “new direction” of their ninth album that has apparently alienated Weiss?

In its message at least, the new record is furiously, vitally Sleater-Kinney: Corin Tucker has called it “a power grab”, while Carrie Brownstein describes it as “an unabashed expression of existence”, with the band taking a stand at a time when threats to women’s freedoms in the west are, at both micro and macro levels, becoming ever more overt, organised and persistent.

But in its sound, sizeable changes have occurred. Firstly, there was a new MO enforced by simple geography: when Brownstein and Tucker started work on the new songs, the former was living in LA, Tucker in Portland, Oregon, so instead of playing together and talking ideas over in the same room as usual, they each worked at home on demos, writing on synthesiser and keyboard – in itself a change – and exchanging sound files. It was a process Brownstein describes to Uncut as “telling stories and sending the next chapter back. Corin would send something, so I would think, ‘OK, what’s another version of the story?’ So it felt novelistic in that way, or even like a series of short stories. And I think that’s where a lot of the different sounds came from – that allowance of someone else’s vision to hopefully take hold before we’d even finished writing the song.”

Sleater-Kinney then took those demos into the studio in July of last year with producer Annie Clark, aka electro-avant-pop maximalist St Vincent. It’s proved a controversial appointment and The Center Won’t Hold certainly features Clark’s fingerprints across its 33 minutes: there are more major keys, heightened dynamics and newly prominent synths and keyboards that mine novel seams of distortion, notably blown-out low-end frequencies. These are used most strikingly on the panoramic “Ruins”, the boldly overdriven “Bad Dance” and the title track, whose metallic buzz reflects the urgent mood that looms over the whole set. These may be fresh textural settings for S-K, but they’re still very much in step with the band’s take on drama, common to their whole catalogue. And while much has been made of the hiring of St Vincent, she came in as a longtime fan of the band – covering “Modern Girl” early last year, in fact. S-K themselves are hardly allergic to ’80s pop, either, with No Cities To Love’s title track and “Hey Darling” demonstrating that they’ve inherited as much from The B-52s and Pat Benatar as from Patti Smith and Poly Styrene.

As Brownstein tells it, three songs are presented as “poke holes” into the album: the title track, with its restrained first half later submerged by riotous punk fuzz; “Ruins”, where Tucker’s lyrics summon a metaphorical monster of our own making (“You’re a creature of sorrow, you’re the beast we made/You scratch at our sadness until we’re broken and frayed,” she states in her magnificent, throaty contralto); and “Hurry On Home”, a spiky comment on issues around compliance and amenability in relationships in which Brownstein’s declaration – “You know I’m unfuckable, unlovable, unlistenable, unwatchable” – speaks to the internalised fear of Everywoman and is carried by a high-stepping, punk-pop melody, a disco beat and a new digital crispness. “We thought, ‘This is the album’,” she says. “It’s scary, it’s vulnerable, it’s personal but it’s character-based at times, but also unmasked.”

Self-exposure and truth-telling – each as much political act as human connector – have always been central to S-K’s ethos, and The Center Won’t Hold is no different. It emerged from the fallout of the 2016 US presidential election, with the defeat of Hillary Clinton and the rise of our new world (dis)order. Friendship and music provide solace for the trio on “The Future Is Here” (“I need you more than I ever have because the future’s here and we can’t go back”) and “Reach Out”,  a triumphantly roaring power ballad that finds Tucker announcing, in what might be interpreted as a prediction of Weiss’ departure, “I can’t fight without you, my friend…” “Broken” is its polar opposite: the album’s final track, written by Brownstein on piano and with a melody sung by Tucker, it applies a melancholic, supper-club lustre to its homage to Christine Blasey Ford and all the other women who’ve spoken out publicly against their sexual aggressors: “She, she, she stood up for us when she testified/Me, me too, my body cried out/When she spoke those lines.” It’s an artfully powerful song, but it’s not inconceivable that one of rock’s most fluid and wild drummers might have been slightly put out by this new style. Similarly, the doo-wop-influenced disco of “Can I Go On” finds little room for Weiss’s freewheeling talents.

It’s the joyously defiant and hopeful “LOVE” and “Bad Dance” that are the album’s existential axis, however. In the former, Brownstein recaps the story of S-K’s genesis in her friendship with Tucker and her own rescue by music as a young girl who “came up in the void” outside Seattle. “Heard you in my headphones, slipped you my address/Call the doctor, dig me out of this mess/ Tuned it down to C, turned the amps to 10/A basement of our own, a mission to begin,” she sings to a cheerful new-wave tempo, referencing S-K’s second and third albums. Brownstein then turns her attention to society’s expectation that women over 40 take up less space – diminishing themselves physically and muting their expression – and surrender the rock music game to a younger gang: “Done with being told that this should be the end/Fighting is the fuel and anger is a friend/There’s nothing more frightening and nothin’ more obscene/Than a well-worn body demanding to be seen.” In the swaggering “Bad Dance”, we’re commanded by Brownstein to “be the weapon, be the love”, and to dance off our rage against the chaotic end, however futile that might be.

Sleater-Kinney may have changed significantly, then, in sound and now in lineup, and if they manage a 10th record those changes will perhaps be even  more pronounced; but their inimitable fury and drive is intact. A paean to survivors and those struggling to endure, The Center Won’t Hold shouts affirmation to all those listening, of course, but in particular to women: it’s not you, the songs seem to say – it’s Them.