Introducing the Ultimate Music Guide to The Fall

Celebrating the singular music and wisdom of Mark E Smith 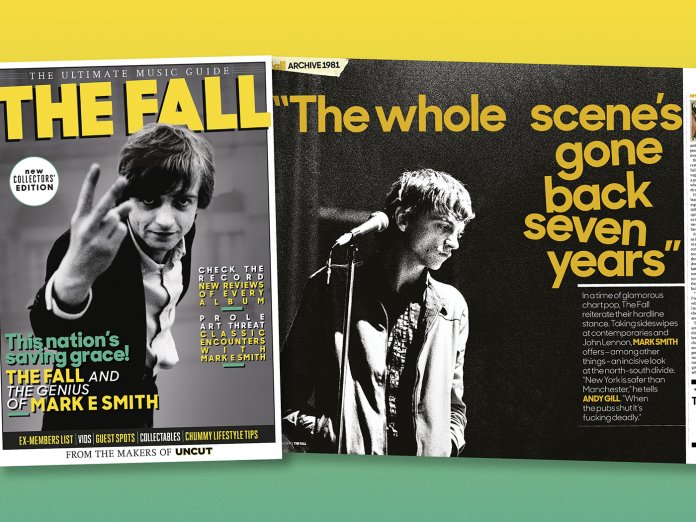 Buy the Ultimate Music Guide to The Fall here – with no delivery charge to the UK!

Shortly before I am introduced to Mark E Smith in early 1998, his press officer tells me that whatever I might have heard lately, The Fall is still in robust professional condition. He does this by clapping me round the shoulder and saying, in an approximation of Smith’s north Manchester accent, words which have endured longer than anyone might ever have expected. Musicians come and go, Smith has recently told his PR, but “if it’s me and your granny on bongos, then it’s a Fall gig.”

It’s hung around, this line – speaking perhaps to the affection Fall fans have for the idea of Smith as a person of singular will, and his comic disdain for the other musicians in The Fall. There was also something about it which suggested he was indestructible, that whatever happened, he would always be around: a new Fall LP in the works, a new set of lyrics to revel in, and new cultural irritations to be despatched in a free-roaming pub interview.

All of which made Mark’s death in January 2018 particularly sad; the passing too soon of an utterly original talent, whose music – surprising, dense, literate, tuneful, impenetrable, funny – was so much a direct result of this personality and charisma. Mark and the music press were a gift to each other, and in this latest Ultimate Music Guide, alongside deep new appreciations of The Fall’s records, you’ll find a selection of some of his best interviews.

As time went on, he remained on his guard in these, wary that his witheringly unique take on the world could turn him into a known quantity. “Don’t think you’re talking to Paul Weller or somebody,” he said to me at one point when we first met. He also made a couple of remarks about what I looked like and what I was wearing, which at the time possibly obscured for me the point he was trying to make.

Namely that he was always one step ahead; eager to deflect from himself, and too smart to be imprisoned by his public image. For all his forthright opinion, Mark kept the important part of himself to himself. When we met again years later, I wondered, given his interest in prose writing, if there would ever be a Mark E Smith memoir. He was dismissive of the idea. “They’ll never get a true book out of me,” he said, proudly.

That enigmatic fog feels key to what Smith and The Fall did. His best work didn’t deal in fantasies, but processed the world to leave it with the magic of an espionage story – codes and aliases, locked doors, missing pieces. Everyone has their own Fall. And as someone told me when I was preparing this magazine, there’s always the fear that someone knows more about it than you.

This latest Ultimate Music Guide is an effort to make sense of, and revel in The Fall’s extraordinary world. Fall scholarship extends to vast online libraries of footnotes, talk and conjecture, which proliferates like tangential thoughts within MES’s brain. Though he himself was apparently no fan of the speculations of, as he put it, “old Fall fellas”.

Uncut met MES for the last time in autumn 2017, but if he was embattled (ex-wife Brix was playing with ex-Fall members), he remained inspired by his earliest influences: the Vorticists, original thinking, noise.

“In their own heads,” Mark told Uncut’s Tom Pinnock about Fall members past, “Mark’s just the drunken singer who didn’t know what he was doing. They seriously believe it!”

We only have this excerpt. But hopefully, this magazine will help you piece together what really went on there.

It’s in shops from Thursday (March 11) or you can buy a copy online by clicking here – with free P&P for the UK.