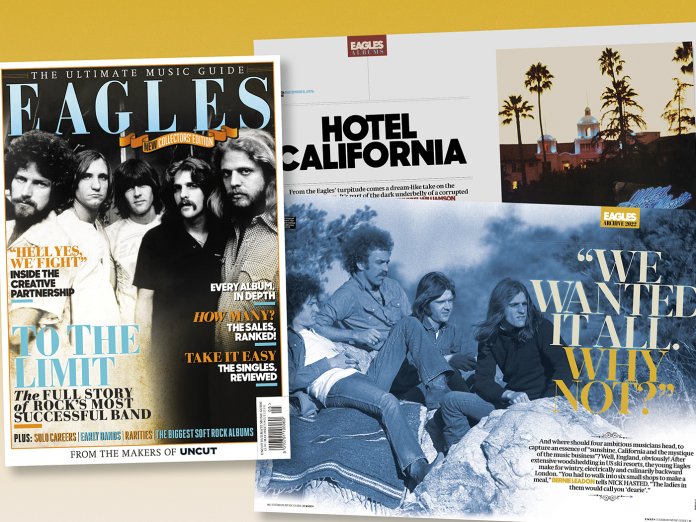 One thing you can be pretty sure the Eagles never did was to take it easy. Though already veterans of several countrywide late 1960s bands from the tail-end of the country rock boom, by the time the original line-up came together at Doug Weston’s Troubadour Club in Los Angeles, they weren’t so much disheartened by what had gone before, more primed and ready to make their next move.

In the band’s circle were other promising artists. Linda Ronstadt, with whom they first performed together. John David Souther, who was in a band with Frey. And Jackson Browne, who, like Souther, contributed material to the new group. “Everyone was coming to California, and in the end that was what they were writing about,” Browne told Uncut, in just one of the eye-opening archive interviews you’ll find inside this latest Ultimate Music Guide. “That projected dream of what freedom could be. Vacate your assigned positions in life and be what you fucking want.”

Now in the right place at the right time, the Eagles seized their moment. Ambitious musically as well as personally, they were driven by what some called perfectionism, but might more correctly be identified as a desire to maximise their potential. Over their legendary run of albums in the 1970s – reviewed in-depth on the following pages – the band moved from definitively mellow recordings with contributions from each member, through concept albums, and increasingly to a completely unique and widescreen take on the state of their era. Along the way, they touched on ecology, paranoid relationships, hard rock and disco.

As it had been for Crosby, Stills and Nash, close harmony served both as a description of the band’s vocal style, and an ironic comment on the state of relations within the group. As you’ll read, what began as a group perceived as based around the talents of its two most experienced members – Bernie Leadon, once a Flying Burrito Brother; Randy Meisner, late of Poco – quickly came to turn on the fortunes of the youngest members: Don Henley and Glenn Frey.

The person who got the point quicker than anyone was Irving Azoff, who became the Eagles’ manager/champion. The other players were, as he saw it, “sidemen” and this became a governing principle for the band. Other musicians might contribute. Joe Walsh brought a toughness to their sound and one of their greatest songs, “Pretty Maids All In A Row”. Guitarist Don Felder didn’t only mesh well with Walsh, he also wrote the chord progression that the band called “Mexican Reggae” and which we know as “Hotel California”. Still, no-one pretended that this was a democracy.

The fact that the Eagles are still playing in 2022 is down to the strength of music made on that run of 1970s albums, and to Azoff’s belief in the band long after it had ceased to exist. After a decade watching them do their own thing separately, Azoff put together the Common Thread tribute album in which country artists performed Eagles songs. He held a fabled lunch meeting at which he persuaded the warring factions to bury the hatchet, and reform.

In his most recent meeting with Uncut, the band’s driving force, Don Henley, was circumspect on many aspects of the band’s career – but still couldn’t quite get over that decision to reform, and just how much Eagles music still means.

“When the Eagles broke up for 14 years, we didn’t know there were so many people who still wanted to see us play,” Don told Andy Gill. “We were just too angry and fed up with each other: ‘I’m not getting onstage with that guy again, no matter how many people want to see us!’ But when we started touring again, we were just flabbergasted at how many people were turning up.”

Enjoy the magazine, and the shows if you’re going. And take it easy.