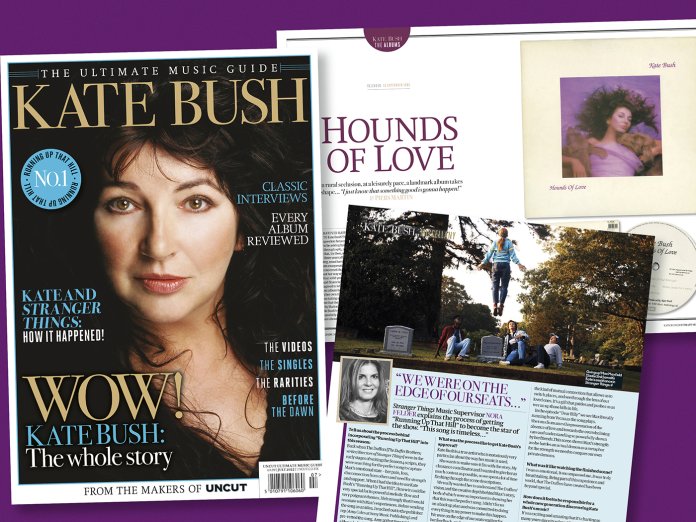 As she was writing her extraordinary Hounds Of Love album, time was very much on Kate Bush’s mind. Her music, as she explained in 1985, was born of experimentation, and took a very long (and expensive) while to bear fruit in the studio. For that and other reasons, her record company had an eye on the clock too – after over two years away from the spotlight, there were concerns that Kate’s public might have forgotten her in the wake of The Dreaming. As far removed from these kind of pressures as possible, at a new studio built in a Kent farmhouse, Kate Bush was working at her own pace on remarkable, “rhythmic” new songs.

With a fittingly idiosyncratic sense of timing, it’s one of these songs – “Running Up That Hill” – which prompts Kate Bush’s unexpected return to the conversation in 2022, and which we celebrate with this current edition of our Ultimate Music Guide. At the time of writing, the song is number one in the UK singles charts (though it now holds a record for having taken 37 years to get there), and is still in the US top five. The success has even prompted some rare breaking of cover by the artist herself.

Thanks to an interview with Radio 4’s Womans’ Hour we have been able to peer briefly through Kate’s privacy. We learn that she is landline not Zoom call or mobile. That she is entertained by the song’s new-found success (“the world’s gone mad”). Also that she is aware of TikTok, but not of “WitchTok”, a Kate-centric strand of the platform (which, she says, “sounds ridiculous”).

More particularly, she’s happy with the event that has prompted this resurgence of interest in her music: the use of the song in the Netflix series Stranger Things. Although she never listens to her “old stuff” her household are fans of the show, and she is happy the song has been used in such a “special” way (for the uninitiated, the song rescues a young female character called Max, who is in mortal/supernatural danger).

Maybe the most interesting element to be gleaned from Kate’s interview with Emma Barnett is an off-the-cuff remark she makes about the nature of music as opposed to other artforms. “Other artforms sit in their own space,” she says – whereas music diffuses in a way that visual art or contemporary dance or sculpture might struggle to. “It finds a way of touching people.”

What you’ll find in this reprint of our sold-out guide from 2017 is the story of how Kate’s music has done just that. Told through in-depth writing about Kate’s albums (also her singles and videos), and in classic interviews from the archives of NME, Melody Maker and Uncut, it’s the whole story of this remarkable artist’s work – even though it might not yet be the complete one. As recent events have shown us, you can never quite tell when the next something good is going to happen.