Introducing the Deluxe Ultimate Music Guide to The Byrds 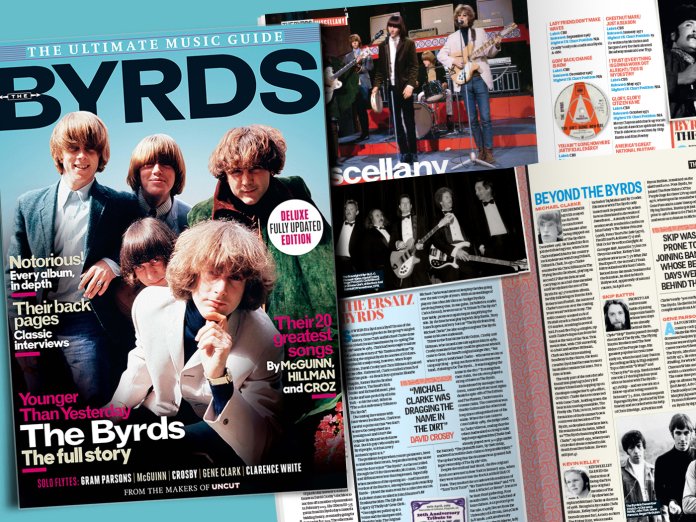 When some years ago Roger McGuinn connected with Uncut to talk about the band’s latest box set – 2006’s There Is A Season – he was reminded of an early guest at the band’s 1965 recording sessions: Bob Dylan.

Dylan – then as much songwriter selling his wares as lightning rod for twentieth century culture – had arrived, essentially, to pitch the band his song “Mr Tambourine Man”. David Crosby apparently wasn’t keen on the time signature, or seemingly on much else about it – though the band were ultimately convinced by its writer to give it a shot.

Dylan hung around, and was still there when the band got the song down completely, turning it from a delicate acoustic piece into something which seemed to hover somehow, powered by its own ethereal forces of guitar and harmony, becoming the “magic swirling ship” emerging from Dylan’s tumbling words. As McGuinn recalled it, Dylan asked “What’s that?” He no longer recognised his own song.

This kind of transformative power is part of the magic of the Byrds. Folkies who had bent an ear to the Fab Four’s British invasion, the band had a revolution of their own: their electric 12 string guitars took trad arr to a new dimension; they brought John Coltrane into psychedelic pop, took hippies to the heart of Nashville, and brought post-modernism and abstract computer noises to the middle of a mainstream guitar pop album.

There’s not much to compete with joy of hearing “Wild Mountain Thyme”, “Eight Miles High”, “So You Want To Be A Rock And Roll Star” or any other classic Byrds recording, and that’s been the inspiration behind this deluxe edition of our Ultimate Music Guide to the Byrds. Here we’ll go deep inside the albums (ideas to mull over: The Byrds could have got by without Bob Dylan, – but not without the Beatles), and pull out some memorable archive encounters from the archives of NME, Melody Maker and Uncut to help tell the band’s compelling story.

There’s plenty to enjoy in these 148 pages. Here you’ll find details of David Crosby’s epic musical journey, read Gram Parsons’ only encounter with the UK music press, and hear the tale of lesser-known Byrds like Clarence White, who left the Byrds, and this world, tragically and far too soon.

For Uncut in 2006 McGuinn succinctly reflected on the band’s magnificent legacy but also acknowledged that their first steps in the studio were faltering. It turns out that only he was allowed to play on “Mr Tambourine Man”, the other parts being played by Hal Blaine, Leon Russell and other members of the Wrecking Crew. When all the band did finally record together successfully for their next album, as Roger remembers, it took them 77 attempts to record a take of Pete Seeger’s “Turn! Turn! Turn!”.

It sounds like a lot – but as you’ll probably know already, it was undoubtedly worth it.