Introducing the Deluxe Ultimate Music Guide to The Beach Boys 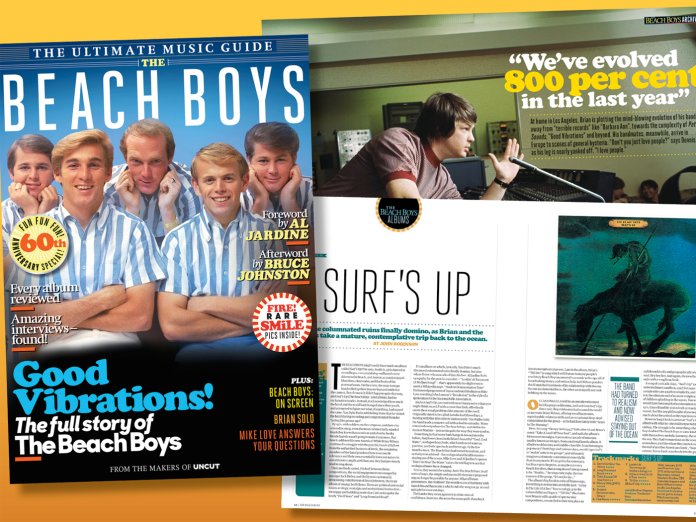 It’s always good news when we get to announce a new publication here at Uncut. This time is no exception: as we bring you word of our new 148 page, bushy-bushy, 60th anniversary deluxe edition of our Deluxe Ultimate Music Guide to The Beach Boys. What’s particularly special this time, is that we’re not only announcing the magazine but also the possibility of a full-scale Beach Boys reunion!

As you’ll read in the new issue, the story of The Beach Boys has involved the timeless and ground-breaking music that you’ll know and love. It’s also brought its fair share of personal tragedy, mental cruelty, line-up changes, litigations, and retrospective score-settling – an unseemly scramble for control of the band’s brand name, often at the risk of tarnishing the wounded innocence of much of the best Beach Boys music.

Writing to you now in June 2022, there are two Beach Boys-related acts about to celebrate the band’s 60th anniversary this summer. One is headed up by Brian Wilson (billed as ‘Co-founder of the Beach Boys’), who plays with a band which includes Beach Boys Al Jardine and early 1970s wunderkind Blondie Chaplin. The other is The Beach Boys themselves, whose current iteration features founder member Mike Love and Bruce Johnston, who joined the band as a replacement for Glen Campbell in 1965 and spent the next six years delighting audiences and casually dropping compositional gems into the band’s recorded catalogue.

We’ve spoken at length to both Al and to Bruce to bring you the warm and vivid reminiscences that begin and end the new magazine. We’ve also picked up with to Blondie Chaplin about his time with the group round 1972-3, and how Carl is the Beach Boy we should all be listening out for more (if you know his song “The Trader” you’ll know why he’s right). Along the way, we’ve spoken to the current guardian of the Beach Boys legacy, Mike Love about his favourite songs, and about the future.

It’s here where things start to get interesting. The Beach Boys haven’t really been reunited in a substantial way since their 50th anniversary tour with Brian, Mike, Al, Bruce and early member David Marks in 2012. There was an album, That’s Why God Made The Radio, too but since then, the band members have kept their harmonies in separate camps.

But hold on! Asked about his part in that 2012 reunion, Al told us straight away: “I was rather hoping to have another one. When you talk to Mike tell him it’s really imperative that we need to do it one more time for the world. We all need to get out there and show some unity and do some fundraising. I know Mike would like to do a couple of things and I wanna reinforce that. We should do a world tour together.”

To use our magazine to put The Beach Boys together would be nice, it’s true. But it’s Al Jardine who really got to the essential simplicity at the heart of 60 years of The Beach Boys. “What would we do without music?” he asked us.

“We’d be lost, wouldn’t we?”, he said, before we could answer – as only someone with a feeling for its healing power truly can.