Pitch black comedy from the team behind Juno... 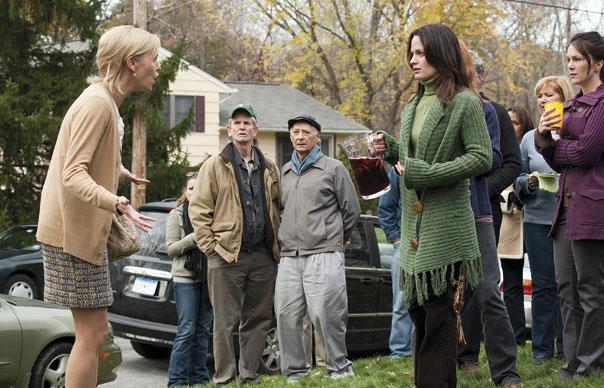 Pitch black comedy from the team behind Juno…

The golden rule of contemporary American comedy is: be sure to have a protagonist that viewers will like. It’s the default recipe for crowd-pleasing, stress-free entertainment, but it also explains why so much current fodder is formulaic, reassuring and desperately afraid to ruffle the audience’s feathers. But one notable dissenter is director Jason Reitman, who favours less likeable lead characters like George Clooney’s hard-nosed management consultant in Up In The Air and Aaron Eckhart’s tobacco lobbyist in Thank You For Smoking.

Mavis Gary (Charlize Theron) is another such character. She’s left her Minnesota home and escaped to the big city – Minneapolis, as it happens – to pursue her dreams of being a writer. But pumping out high-school romance novels for the young adult market clearly isn’t fulfilling as she’d perhaps have hoped.

A narcissist who never moved on from her teenage high as a prom queen, Mavis has a bee in her bonnet about the past, and particularly The One That Got Away – her school beau Buddy (Patrick Wilson). Like the heroine of many a small-town romcom (the spectre of Jennifer Aniston may manifest itself before you here), Mavis embarks on a mission to revisit her roots and recapture her old love. But here’s where Young Adult subverts the template: not only is Mavis a severe case of arrested emotional development, fixated on her moment of teenage glory, she’s hair-raisingly insensitive to the emotions of others, and effectively sociopathic, her pursuit of the married Buddy effectively stalking.

Where other comedies might have made light farce out of Mavis, Young Adult takes her seriously enough to make her a genuine study in psychological horror. The moment she breezes back into town, treating everyone around her with a city girl’s lofty contempt, we realise we’re dealing with someone seriously damaged. In one scene, Mavis runs into ex- schoolmate Matt Freehauf (Patton Oswalt), whose life has been scarred by a horrific incident of gay-bashing – not that Mavis is remotely able to comprehend anyone’s pain but her own.

The film’s bitter, revealing comedy is rooted less in farcical situations than in acute characterisation. Young Adult is written by Diablo Cody, whose much gentler script for Reitman’s Juno established her as the most prominent cult screenwriter since Charlie Kaufman. This pitiless depiction of female disappointment and self-loathing is nevertheless remarkably subtle: for all its scenes of excruciating misbehaviour, the film turns out surprisingly poignant, albeit in a singularly acidic way. Unusually too for Hollywood comedy, the film never mocks or patronises its small-town characters, but suggests that it’s saner to live a mundane, low-key life than to wreck your soul with dreams of self-aggrandisement: a stark corrective to the bogus ‘anything can happen’ fantasies of much US cinema. The highly likeable flag- bearer for balanced normality is Buddy’s wife Beth (Elizabeth Reaser) who simply enjoys playing Teenage Fanclub covers in a shaky but exuberant moms’ bar band (the bitter twist for Mavis is that TFC’s “The Concept” was always supposed to be her and Buddy’s song).

As Mavis, Charlize Theron proves a revelation. A somewhat underrated performer despite her Oscar-winning role as killer Aileen Wuornos in 2003’s Monster, Theron has recently shown herself to be a brisk comic player, and downright good sport, in her self-mocking turn as a dorky Brit in TV’s much-lamented Arrested Development. In Young Adult, Mavis’s rebarbative neurosis gives Theron plenty to run with: watch the scene where Mavis badgers an unimpressed bookshop assistant about displaying her books more prominently. This is the comedy of delusion, and it really hurts – not least because Theron makes us understand Mavis but never courts our sympathy.

Theron has a terrific foil in comedian Patton Oswalt (best known in the UK as the voice of the lead rat in Ratatouille), who takes what ostensibly seems the generic role of the long-suffering barroom confidant and turns it into something very unexpected. Oswalt’s characterisation is just one example of the way that Young Adult bends the comic rules. Another is the way the film flouts the much-vaunted law of ‘character development’. With a black wit and a bracingly hard-boiled heart, Young Adult is pithy and pitiless – adult comedy through and through.
Jonathan Romney