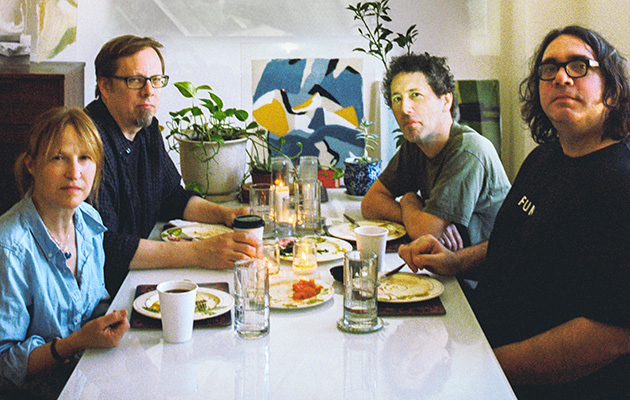 Three-quarters of the way through one of their finest albums, 1997’s I Can Hear The Heart Beating As One, Yo La Tengo cut from the breezy bossa-nova of “Center Of Gravity” and move straight into “Spec Bebob”, a borderline-unlistenable 10-minute jam between drums and distorted organ. It’s a typical spin between extremes for a group who have often found it hard to keep things simple.

So far, the only moment on record where they’ve resisted the urge to demonstrate their full – and admittedly thrilling – range is 1990’s Fakebook, their mainly acoustic fourth album. With Georgia Hubley and Ira Kaplan joined by Dave Schramm on electric guitar and Al Greller on double bass, the record is still a low-key delight, a fan favourite more intimate and warm than anything else the group have produced.

Developed by Kaplan and Hubley during stripped-down radio sessions promoting the previous year’s President Yo La Tengo album, Fakebook included adept covers of songs by the likes of Cat Stevens, John Cale and The Kinks, reworked versions of older YLT songs such as “Barnaby, Hardly Working” and a handful of brand new tracks, including the effortless, sublime opener “Can’t Forget”. A follow-up to the album, then – a Fakebook 2, if you like – is a surprising, though very welcome move for Yo La Tengo to make 25 years later.

Stuff Like That There mimics its forebear in nearly every way, welcoming back Dave Schramm on guitar, though this time alongside longtime YLT bassist James McNew. Throughout, Schramm’s playing is a delight, his electric guitar swathed in delay and tremolo on “Deeper Into Movies”, and his slide achingly quicksilver on a cover of Hank Williams’ “I’m So Lonesome I Could Cry”.

The gorgeous version of Great Plains’ “Before We Stopped To Think”, sung by Kaplan, is a sure high-point, but the most affecting, heartbreaking songs on Stuff are all sung by Hubley, whose voice seems to have grown richer and more melancholy with each passing year of the last quarter-century. On the evidence of her performances here on Darlene McCrea’s country ballad “My Heart’s Not In It”, Antietam’s stately “Naples” and especially “I’m So Lonesome I Could Cry”, she’s stealthily become one of America’s most quietly impressive vocalists. A hushed take on “Deeper Into Movies”, originally a fuzzy highlight of I Can Hear The Heart Beating As One, even utilises the classic Yo La Tengo trick of having Kaplan and Hubley harmonise, except with the guitarist taking the higher part and Hubley the lower.

Of the two new songs, “Rickety” is almost acoustic motorik – on a more orthodox Yo La Tengo album, it would perhaps end up as a close relation of Summer Sun’s “Little Eyes” – while “Awhileaway” is a pretty, waltzing ballad that would have sat well on 2000’s tender And Then Nothing Turned Itself Inside Out.

Not all of the songs work, however – the band’s take on The Cure’s “Friday I’m In Love” sticks out as a little too predictable and rushed among its more subtle neighbours. Indeed, as seems to be the case with most sequels, Stuff Like That There can’t quite match up to Fakebook. For all the album’s strengths, something – novelty, most likely – is often lost when a trick is repeated, no matter how successful it was the first time around.

Yet these are minor gripes – on the majority of Stuff Like That There, Yo La Tengo are able to recapture the magic of those sessions a quarter of a century ago, and introduce us to some more underrated classics. Alone with its stylistic predecessor in their catalogue, Stuff is a comforting listen, startlingly consistent in mood and featuring some of Yo La Tengo’s – and especially Georgia Hubley’s – most touching moments. Frankly, it would be churlish to refuse a second helping.

Q&A
Ira Kaplan
Why did you decide to revisit Fakebook as a concept after 25 years?
We often play acoustically and we do lots of covers anyway, so I think we’d circled around [the idea] and gotten kind of near it almost constantly. Then the idea came up and it felt right. We didn’t really question it much more deeply than that. But I think for a while we felt the need to establish that we were not that band, that even when we made Fakebook that was a side of us but not the whole band. Even at the time, Fakebook wasn’t a plan or a strategy, it just seemed to make sense in the moment.

How did you go about choosing the covers?
There’s a number that we have done fairly steadily over the years, then once we knew this was what we were gonna do, a bunch of new ideas just flooded into us – The Parliaments song, the Darlene McCrea song… We also did a Sun City Girls song that didn’t end up on the record.

Georgia’s voice is getting richer as time goes on.
Very quickly it became apparent to all of us that we wanted her to sing more on this record than she’s ever sung. I mean, she’s definitely carrying the singing. With something like “Naples”, she did more than in the past to make sure she was singing in a key that she felt comfortable in – we do it in a different key than Antietam did. In the first song, when I hear her sing “my heart’s not in it”, my heart just melts.
INTERVIEW: TOM PINNOCK